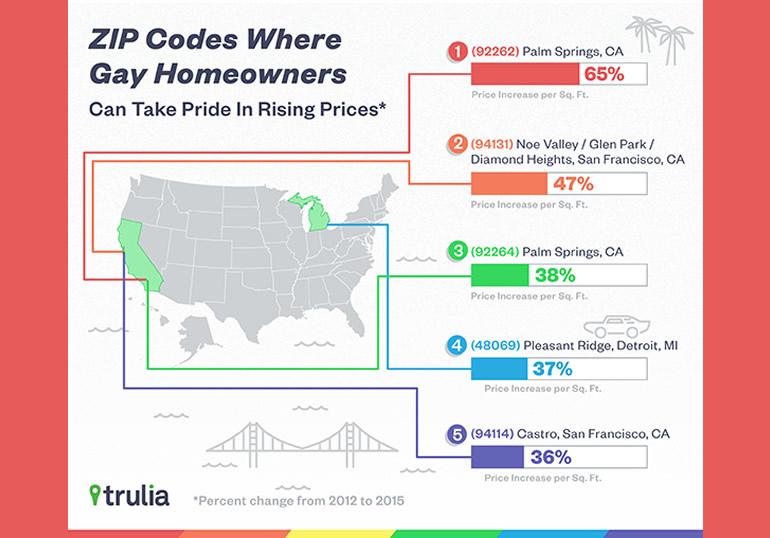 Three years ago, we explored how the housing market fared in the gayest neighborhoods across the country. One of the most interesting findings from that report was that gay men tended to live in more expensive ZIP codes than gay women, even when looking at ZIPs within the same metro. In honor of Gay Pride this year, we wanted to revisit these neighborhoods and find out what’s changed since 2012.

To do this, we calculated the share of households that are same-sex male couples and same-sex female couples in every ZIP code in America using the 2010 Census (see note below on how we did this). Focusing on just the top 10 ZIPs with the highest concentration of same-sex male and same-sex female couples, we then calculated the median price per foot of homes for sale in each ZIP code on Trulia as of June 1, 2015 and compared it to June 1, 2012 to find out how prices have changed, both over time and relative to their metropolitan area.

Over the last three years, home prices in gay men neighborhoods have grown by an average of 23%. Of course, this figures mask changes in individual neighborhoods, so here’s a look at where prices have risen the most. 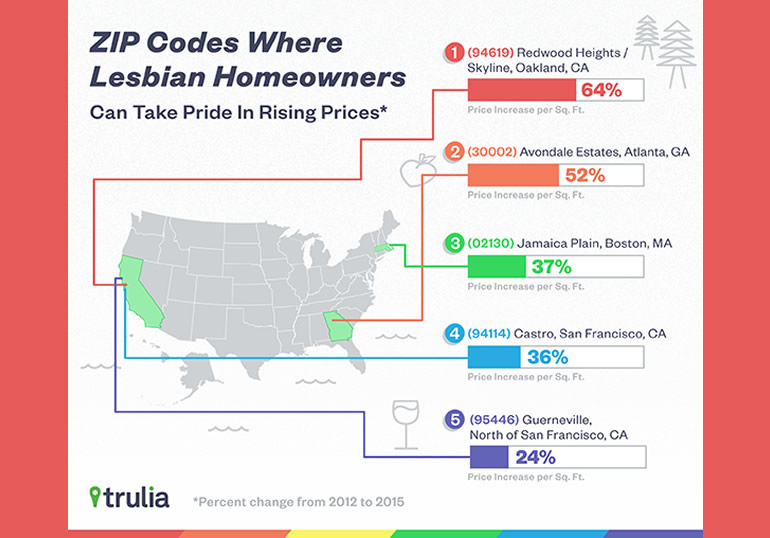 Home Price Growth Outpaces Metro Area Where Gay Women Live
Several gayborhoods are located in expensive metros that have also experienced sharp price gains in the last few years, such as San Francisco and Boston. So it could be that rising home prices in these neighborhoods are driven by price changes in their respective housing market, rather than the demand to live in gayborhoods themselves. To tease out these neighborhood-level effects, we’ve compared prices in these gayborhoods with their respective metro areas.

For example, prices in gay women neighborhoods like Avondale Estates in Atlanta, Jamaica Plain in Boston, and Northampton in West Massachusetts have grown 35%, 28%, and 11% points faster than their metro area. On the other hand, the top two fastest growing gay men neighborhoods have only grown 13% (Palm Springs, CA) and 5% (Rehoboth Beach, DE) points faster than their metro, and the third (Noe Valley / Glen Park / Diamond Heights, San Francisco, CA) actually lost one percentage point.

(The fine print: The Census doesn’t ask sexual orientation, of course, so the only way to measure gay neighborhoods is based on where couples live. The Census data requires some corrections and adjustments, described here. Finally, ZIP codes don’t line up perfectly with neighborhoods, but we did our best to use the closest neighborhood names that correspond to the ZIP codes in our analysis.)