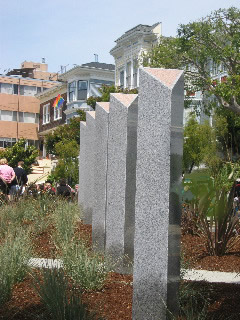 The 15 granite pylons rise in remembrance of the estimated 15,000 gays, lesbians, bisexuals and transgender people who were persecuted imprisoned and killed during and after the Nazi regime.

Throughout history, there are times when prejudice overwhelms all reason and humanity. Such was the case under the Nazis. But even after the Nazis' defeat, the discrimination against the LGBT community continued, using Paragraph 175 of the penal code. Briefly freed from concentration camps by Allied troops, those prisoners wearing the pink triangle were returned to finish their sentences. Those who survived two imprisonments emerged as second-class citizens even under democratically elected governments.

Pink Triangle Park and Memorial is a place of remembrance, reflection and education - a physical reminder of how persecution of any individual or single group of people inevitably damages all humanity. Please pause for a moment to reflect upon the moral and spiritual aspects of that time and to embrace the individual responsibilities all people share as citizens of a democracy.

Pink Triangle Park and Memorial is the first permanent, free-standing memorial in America to the LGBT experience during this chapter of history. It was built by the Eureka Valley Promotion Association (EVPA), the neighborhood association for the Castro, Upper Market and Duboce Triangle areas. The Park continues to evolve with the hard work of residents and businesses in the area, and with the generous support from Wendy Nelder, Director of the Mayor's Neighborhood Beautification Fund, the Department of Public Works and the San Francisco Arts Commission.

Vision of the Artists

The centerpiece of pink triangle park is an arrangement of 15 sierra-white granite pylons each inlaid with a pink triangle. Each pylon joins with others to form a larger triangle on the hillside. Its base is oriented toward Harvey Milk Plaza and its large rainbow flag. The artists behind PTP are Robert Bruce and Susan Martin. Here is what they say about the creative challenge.

Statement by the Artists

"First we had to decide we wanted to work together. Two strangers brought together by a friend. We agreed to meet, to share tea and crackers. We talked about sculpture, the Vietnam War memorial, and gardens. Specifically, Claude Monet's garden at Giverny and the beautiful green stakes used to support the plants. We talked about the philosophical premise of the one and the many, site-specific sculpture, collaborating, controversy, neighborhood, community. 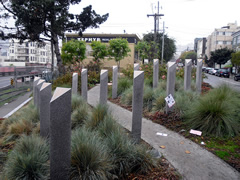 We knew the Nazis imprisoned and killed gays and lesbians: 5,000-15,000 people. We wanted to express the loss abstractly rather than figuratively. We learned that the United Nations was formed in San Francisco, and that without the UN we might not have a Universal Declaration of Human Rights. We wanted the sculpture to be contemplative. We wanted to mourn the dead (past), to celebrate the living (present), and to hope for those to come (future).

It has always seemed very difficult to express anything about living and dying with a single object. Perhaps this is because none of us would be here without the collaboration between at least two people. The simple definition of collaboration is to work with others. We hope visitors to Pink Triangle Park and Memorial will:

Biographies of the Artists 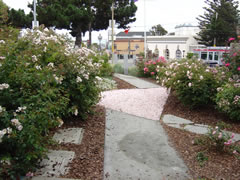 Robert Bruce received his BFA from the University of Houston in 1975. For thirty years he has been a multi-disciplinary design professional. In 1982, he was one of the founding members of STOP-AIDS San Francisco, and designed the STOP-AIDS logo.

Susan Martin received her MFA from the California College of Arts and Crafts in 1981, graduating with the highest honors. Her sculpture has been exhibited both in the Bay Area and in New York. She has received numerous awards such as the Lila Wallace Reader's Digest International Artists' Program, Giverny, France in 1992, and two Pollock-Krasner awards, one in 1987 and a second in 1998.