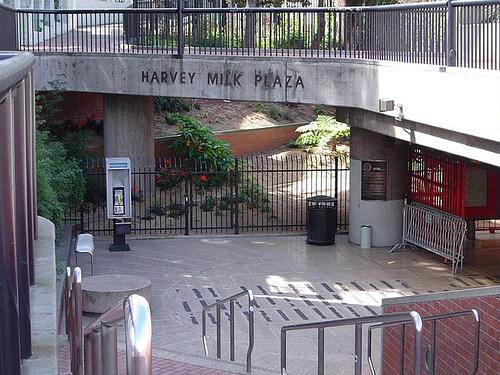 Harvey Milk Plaza is located at the Castro Street Station on the K, L, or M lines of the MUNI Metro. After ascending from below ground the quite square with its sloping steps and bamboo stands as memorial to Harvey Milk, the self proclaimed mayor of the Castro. On November 7, 1997 the plaza was named after him to commemorate the 20th anniversary of his election to office as City Supervisor here in San Francisco. Former Mayor, Willie Brown over saw the ceremony in which it was named. In addition, the infamous rainbow flag was erected and fly's everyday as a statement of equality and diversity. This flag can be seen from miles away and far down market street even at the Embarcadero's Ferry Building.

"If a bullet should enter my brain, let that bullet shatter every closet door,"