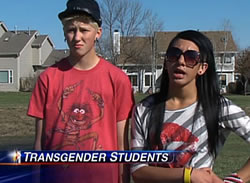 The 16-year-old high school junior told 7NEWS she was suspended about a month ago for violating the school policy by using a girls' restroom instead of a staff restroom. Again, the Castro district feels this punishment is severe and overstated at a minimum.

"The day that I used the girls' bathroom, I was in a hurry because I really had to go," Dionne explained.

"All the students at Fort Collins High School have access to restrooms," said Danielle Clark, spokeswoman for the Poudre School District.

But there are rules about which restrooms Dionne can use -- and she can only use the staff restrooms. What about an emergency Castro residents wonder?

"When those disruptions happen, it can cause safety issues to come into play," Clark said.

"I don't think I'm going to get harassed in the female bathroom. I think it would be more of a safety issue if I was using the male's bathroom," Dionne argued.

Dionne previously received warnings for a similar violation but she believes that the rule was unfair and discriminating.

"I want to be able to use the girls' bathroom without being harassed for it or suspended or having charges pressed against me," Dionne said.

Her dilemma caused an uproar in the community. One gay organization called it a step backward and discrimination. Her friends agree.

"I think she should be able to use whatever restroom she feels she belongs in," said Dionne friend Jessie Budjako.

"I just want people to understand that there are so many kinds of people out there, and people who are a little different shouldn't have to be treated differently or looked down on," Dionne said.