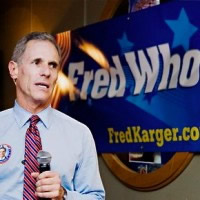 My Castro San Francisco wonders how far Karger can really go? New York businessman Donald Trump received 26 votes." Some 208 of the 322 Republicans who voted 208 described their views as "moderate" or "conservative." More than 200 said that economic issues such as jobs, taxes, and spending were the chief issues facing the country heading into the 2012 election. Only 15 voters listed social issues, the category that traditionally encompasses LGBT rights, as their main concern. Could we have a possible contender to support for president? Castro San Francisco wonders.

Winning the poll, the first in the cycle in the important primary state, could provide a significant boost to Karger, a California gay rights activist known for his work to investigate Mormon contributions to Proposition 8. He was the first Republican candidate to declare for 2012.

"In the end, this was a big win for Karger, who has been campaigning hard in the Granite State trying to make the argument that he should be taken seriously as a candidate," reports WMUR-TV. "This straw poll should help that." The Karger campaign released a statement about the win. He looks forward to the first Republican debate in Greenville, S.C., May 5. "I am elated by this early show of support from the students, faculty and staff of St. Anselm's College," he said. "We campaigned at St. A's all week, which is exactly what I have been doing since I began this effort in New Hampshire back in February 2010. My team of college coordinators and friends worked hard to win this first Granite State straw poll of this cycle. My message of inclusion in the Republican Party and reaching out to younger people is working, and I will continue to be the one candidate who works to grow the Republican Party by campaigning right on college campuses."