Walking on Rainbows: Castro Sidewalks Getting a Colorful Facelift 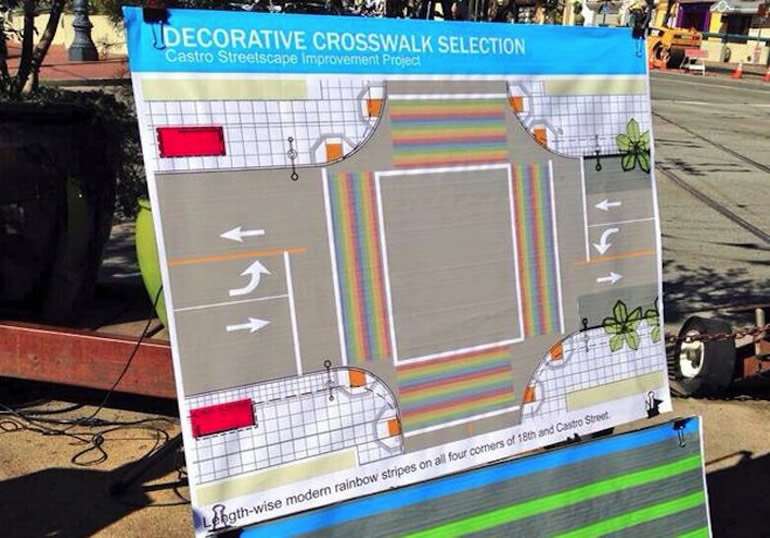 Earlier this month, more than 4,500 Castro residents voted on four designs for new decorative crosswalks at 18th and Castro. So which design took the cake? The rainbows, of course! The winning design was announced last Thursday at the Castro Streetscape Improvement Project groundbreaking ceremony.

Some people were worried that the rainbow crosswalks would make the Castro District look a bit cartoon-like, but like they say — you can’t please everyone! The other three losing designs were a rainbow bandana paisley, a Castro theatre foyer tile-inspired print, and a Muni wire design.

“This streetscape project will be transformational for Castro Street and for the neighborhood,” said Supervisor Scott Wiener in a statement. “Castro Street is one of the busiest pedestrian corridors in the city and at the heart of both our neighborhood and the LGBT community. Wider sidewalks and an improved Jane Warner Plaza, which will allow for more street life and neighborhood interactions, will make a great and historic street even better.” 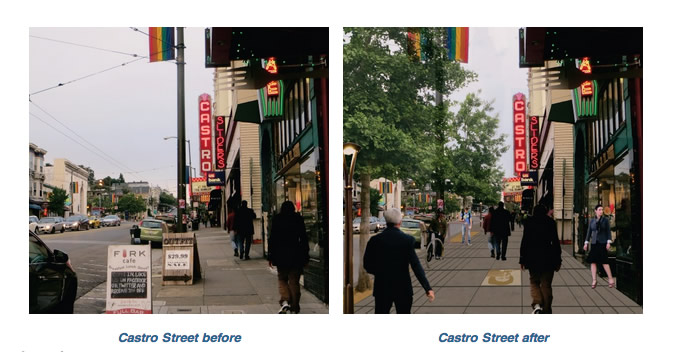 The Castro/Upper Market Community Benefit District voted to fund the $206,000 bid to pay for the decorative crosswalks, as well as programmable LED down-wash lighting on 24 streetlight poles and 20 cement stamped facts about the historic Castro District. “The Castro Streetscape project will make one of our most popular and celebrated neighborhoods more livable and welcoming for residents and visitors,” said San Francisco Mayor Ed Lee, according to SF Gate. “The new design also will improve pedestrian safety.”

The Castro Streetscape Improvement Project is moving full speed ahead and has already started construction. Crews are scheduled to begin potholing, which is the process of excavating small holes along the project limits to determine the location of underground utilities, along Castro Street. This process will take a few days to complete, but once that is finished the crew will then begin working on the west side of Castro Street.

Other Castro streetscape improvements include widening sidewalks, new pavement, and street-side trees. All of the sidewalk improvements and crosswalk coloring are said to be done by October, but don’t worry, no matter what stage the construction is at, it will all be cleaned up and tidy for Pride in June and the Castro Street Fair in October.