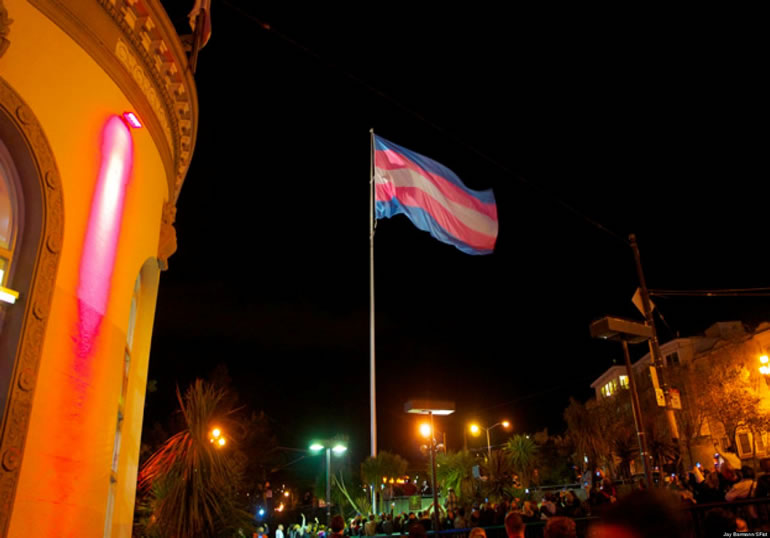 San Francisco City Hall was lit up in blue, pink and white on Thursday. It was a symbol that the greater Bay Area was at the kick off of another weekend’s long series of events to venerate Transgender Day of Remembrance.

The Bay Area Reporter announced last week the dates and times of several events in Oakland, San Mateo and San Francisco. But what those who have only heard of the remembrance in passing may not know is that the B.A.R. is actually the foundation for the conjuncture which has been an annual occurrence going on 15 years strong.

While the observation is always held on November 20--SF's event was held at the LGBT Community Center on Market Street Thursday evening--various remembrance services have taken place starting on November 9. Guest speakers and performers from the trans community come together to be part of the memorial happenings.

It just goes to show how much the event, while grave, has grown from its beginnings just before the turn of the millennium into a thoughtful way of bringing attention to a collective that is still a target of violence and misunderstanding.

B.A.R. transmissions columnist started the original remembrance event in 1999. Rita Hester, a trans woman from Massachusetts was murdered the previous year, and what followed was an outpour of community support that has evolved from candle light vigil to international event. Smith started a web-based project to bring attention and a call to action; it has since expanded into a day of solitude observed in over 20 countries around the world to remember those who have lost their lives during the calendar year due to transgender violence.

Here in San Francisco, the event started with Smith and others posting up in front of the Castro Theatre back in 1998 in the rain to honor those who had lost their lives to violence against the transgender community. (If you haven't read Smith's account on the B.A.R. detailing the growth of the event, you really need to. It's moving and beautifully written.)

This year, Mayor Ed Lee announced that City Hall be lit up in the colors of the transgender flag. While the SF monument now notoriously lights up in the colors for different causes--red and green for Christmas, orange and black for the Giants' World Series victories, rainbow for Pride weekend--this is the first time it has been lit in coordination with Transgender Remembrance.