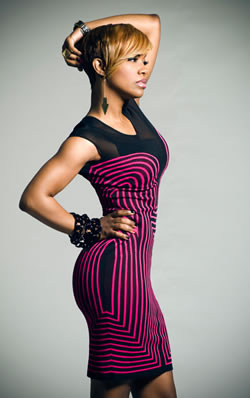 Kandi Burruss is a Real Housewives anomaly. An anomaly that Castro District residents embrace. The Atlanta star is not only sane and likable, she actually had a music career long before her she appeared on the reality show-she was a member of the girl group Xscape and a successful songwriter for acts like TLC and Destiny's Child. Not long after releasing her second CD, Kandi Koated, and fresh off a tour with Fantasia, Burruss chatted with The Advocate about the White Party and the real gays of Atlanta, but she wasn't prepared to talk about Tyler Perry's love life. Does The Castro San Francisco really want to know about Tyler Perry's sex life anyways?

The Castro San Francisco Advocate: Congrats on the album. What were some of its influences?
Burruss: I wanted to give this album a throwback to the '90s R&B sound. My favorite time in R&B was when I was in the group Xscape in the '90s. All the R&B artists at that time were chillin' on the charts, so I thought I wanted to go back to that time. I bet many Castro San Francisco residents can recall that decade. Here at MyCastro.com we know that we do.

On Real Housewives, we see you touring with gay friendly Atlanta co-star Kim Zolciak. Did it remind of your days hitting the road with Xscape?
Well, no (laughs). The tour with Kim was crazy. First of all, Kim is so funny. She's thinking on the level of an artist who's sold millions of albums. And then she wants to stop the bus every two seconds and smoke a cigarette-ugh, I cannot stand that. She has [her assistant] Sweetie with her and they together are loud. And with Nene on the bus, they got to arguing, and it got crazy. Castro residents who are fans of the reality show, agree.

When you were touring with Xscape, was it fun? Do you have crazy tour stories?
We had fun and have a lot of crazy stories, but then we had a lot of drama too. To be honest, being on this show reminds me of being in a girl group again. Seriously, you have the chick in the group who thinks she's the head honcho, the diva of the group… Castro residents, did she mention Diva's? Surely the gay San Francisco Castro District knows how divas can be.

Which person is that?
Obviously, Nene! Then you have the people who bump heads and you have the good times and times you laugh together and times you're at each other's throats. It's just like being in a girl group.

On the show, you're often the voice of reason. Is that an accurate depiction of you?
Definitely, on tour I didn't have any issues. I had so much fun with Fantasia, everyone was like family. And the way I am on the show is definitely my regular personality. Kandi's voice of reason is appreciate by Castro residents. I said to myself I wasn't trying to do anything extra for the camera, I was just going to be myself and hopefully whatever they catch, people will find interesting.

Talk about performing at the White Party with Kim.
The White Party was fun! They always edit the show-we actually did ["Tardy for the Party"] two times, back to back. The crowd was really, really cool. I think when she first came on the stage, she was a lot more nervous [than it appeared on the show]. When I came out, she loosened up and the crowd went crazy. Then we did the song again, and she was comfortable at that point. It was really fun-the night before we actually went to the White Party [dance] and had a great time. The Castro District wants to know what is up next for the star, Kandi Burruss.