Posted on www.castrocourier.com
By Kellie Ell 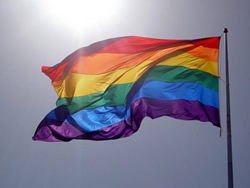 First round of LGBT contributors named, more to be determined The Castro "village" has long been associated with soaring rainbow flags representing pride and equal rights.  Now, with the help of two Castro dwellers, the rainbows are making their way to the neighborhood's sidewalks.

Long-time Castro resident and small business owner Isak Lindenauer, who describes himself as "an old fashioned queen," started the current push a couple of years ago to honor "notable LGBT women and men who have added to the betterment of all peoples."

"I realized there was something I wanted to do for the community as a means to give back for all it's given me," Lindenauer said.Unbeknownst to him, another seasoned San Franciscan living in the Castro and owner of his own public affairs firm, David Perry, had envisioned a similar concept in 1994, right in the middle of what he described as the height of the AIDS epidemic reaching the Castro.  As a result, the proposal took a backseat to greater problems.

With the help of former Supervisor Bevan Dufty uniting the men, the pair formed the framework of the Rainbow Honor Walk through their "shared dream," to celebrate LGBT historical figures, both gay and straight, who have made significant contributions to the community and to educate future generations about the legacy they've left behind by immortalizing them in the pavement.

"Great gay minds think alike," Perry said.  "It's taken this long for someone else to pick up the torch."  But, he says, "I'm thrilled at the progress so far.  You expect a variety of opinions.  But, without exaggeration, everyone has been positive."

Including, he said, the backing of the entire Board of Supervisors who voted unanimously in favor of the Walk in March 2010, the Merchants of Upper Market Street and Castro association, and the public.

"This speaks to the importance of place making, of understanding the history of the gay, lesbian, bisexual and transgender community and how linked it is to the Castro," former Supervisor Dufty said.  "It's an idea whose time has come."

The greatly anticipated Rainbow Honor Walk, much like Hollywood's famous celebrity Walk of Fame, will plaster the walkways of the Castro with their celebrated individuals. These inscriptions, however, will pay homage to the history of the LGBT community with a brief bio explaining the relevance of each name and how they have influenced society.

"This is literally a tribute to those who have walked the walk and talked the talk for LGBT freedom and equality," said Perry, who is now the co-chair, along with Lindenauer, of the Honor Walk.

The first 20 names were selected by a volunteer steering committee based on the criteria of "self expressed LGBT individuals, now deceased, who made significant contributions in their fields."  The winners of the initial twenty slots include San Francisco AIDS activist George Choy, the well-known feminist Del Martin, Bay Area journalist Randy Shilts, artist Keith Haring, writer Jane Addams who wrote about woman's suffrage, poet Allen Ginsberg, and Christine Jorgensen, one of the first known transsexuals to complete reassignment surgery, as well as others. Lindenauer stressed that, "we couldn't choose a lot of people. Hundreds of people were worthy."  But, he added, "The Wall will continue to grow."

The duo's goal is for more names to be added over time, but he said the criteria for landing on the Walk would also change with time. "We're a peculiar minority, we're invisible," Lindenauer said.  "Unless we go through the process of coming out [to the Castro], you don't have a real idea of who we are.  By placing plaques on the sidewalk, we get a chance to make it clear… We're a community of diverse interests."

Right now, Lindenauer said the volunteer group is in the "design phase" and is in the process of organizing an art contest to help select an image for the plaques that "gives the community a sense of what we're all about."

"It's an ongoing process," he said. This process includes more fundraising and seeking approval from the Arts Commission on the winning design.

"Everybody stands to learn something from it—both gay and straight," Lindenauer said.  "Our intent is to educate, create pride and to create commerce."