Getting Hot and Bothered About the New Castro Sidewalk Etchings 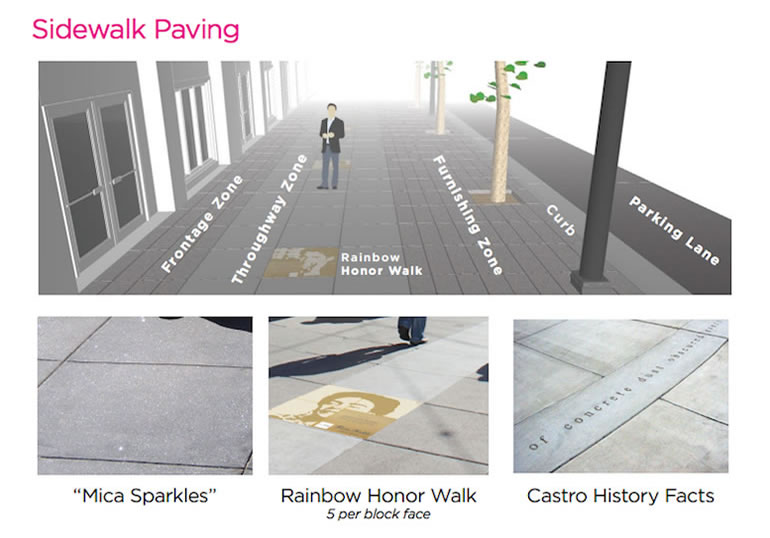 Some folks in the Castro District are getting a little peeved about the new pavement. As part of the Castro Streetscape Improvement Project, new historical etchings are set to be embedded into the sidewalks on Castro Street. The controversy, however, is that many Castro District residents feel as though they did not get enough say in the finalized text, that the meeting for public input was set at an inconvenient time, and that the Castro/Upper Market Community Benefit District is keeping it on the “down low” on purpose.

Trey Allen, a community activist, set up a Facebook Event (http://goo.gl/rBzccP) called, “Make Your Mark on the Castro Street Redesign Historic Sidewalk Etchings,” and has encouraged people to question the intentions of the board and push for more community input. Jim Youll, a member of Allen’s Facebook event commented, “How is it that these meetings are scheduled at a time when concerned members of the public are AT WORK? Are you really interested in the public's input, or just interested in making it look that way? When I was on the board of (and eventually president of) our downtown merchants' association, we met at 7am; anyone who could get up for a meeting between 7am and 8am could make it. Other boards I have served on met in the evenings after conventional working hours. Your way of scheduling meetings in the early afternoon on weekdays is an insult to the phrase ‘public comment.’”

The Castro / Upper Market CBD planned to hold the meeting March 31st, 2014, but changed the date in response to the public’s uproar to provide more feedback. “To allow for ample opportunity for public comment on the history etchings to be incorporated into the Castro St. Design Project, this agenda item is being taken off the Streetscape Committee meeting tomorrow, Monday 3/31/14 and instead will be on the April 10th Board of Directors meeting,” said Andrea Aiello, Executive Director of the CBD, in an email. The meeting will be at 6PM at 501 Castro Street, 2nd Floor so more residents can attend.

As soon as the Castro/Upper Market CBD email was sent, Allen was sure to inform people of the recent change in the meeting schedule: “I received correspondence from Andrea who informs me that the GLBT historical society has been "intimately involved." This is good news! The move to add the historic text to the April 10th board meeting is reassuring. Thank you Andrea for scheduling the agenda item for 10 days advance notice and at a time when people are off work.”

What do you think about the new historical etchings set to be embedded on Castro Street? What would you or will you ask the board at the meeting on April 10th? Tell us in the comments!