Historic Mural Commemorates Right to Marry in the Castro 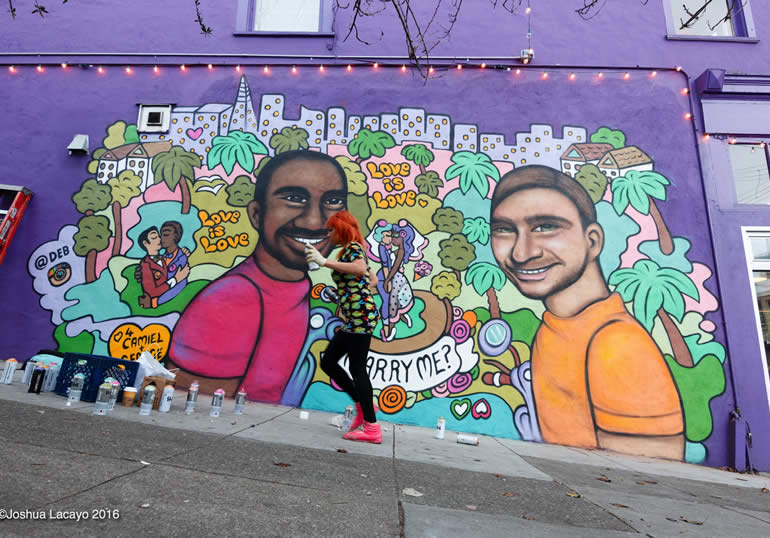 A famous Australian artist has recently painted a colorful mural that commemorates the right to marry for same-sex couples in the Castro.  The large, color mural is located at 18th and Noe Street on the side of Kasa Indian restaurant. The historic mural commemorates the right to marry and is also a romantic Valentine’s Day engagement mural for the Castro resident who commissioned it. Due to the reputation of the artist , the location of the mural in the Castro and the celebration of the recently-recognized constitutional right to marry for same-sex couples, this piece is well on its way to becoming one of San Francisco’s most famous murals.

Aerosol spray artist, Deb, is an internationally renowned muralist. Her unique style has established her reputation as one of the most important modern female muralists and pop surrealist artists. By challenging the rules of what has for many years been a very male dominated industry, Deb has pushed the boundaries within the aerosol art scene and has inspired female and male artists around the globe. Deb’s murals include a famous Ganesh Hindu God Elephant that has become one of the most iconic street art images in Australia and has been used as a symbol for the City of Melbourne. Here in San Francisco, her large mural on the side of Beauty Bar in the Mission has become one of the top mural destinations for mural tours in the city. Deb has also painted striking and highly acclaimed art in Los Angeles, Oakland, Brooklyn, Miami, Brisbane and Sydney. 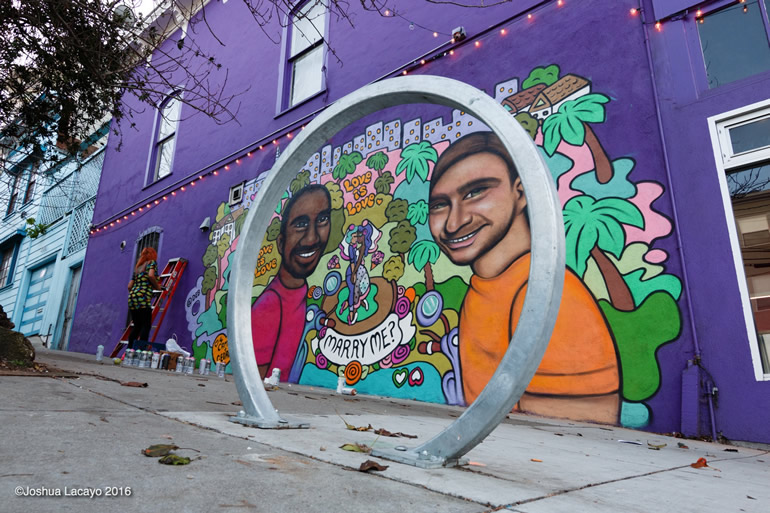 Deb’s Castro mural project – called “Love is Love” - is likely to become one of her most celebrated art projects at the international level. The large mural depicts a handsome gay couple on scooters, above Dolores Park, with a stylized city skyline in vibrant colors in the background. Inside the park are a lesbian couple and what appears to be either two men or a transgender couple, embracing in wedding attire. The phrase “Love is Love” appears over the mixed race couples. The mural beautifully celebrates the right to marry for interracial and same-sex couples.

The mural is also an intimate and bold marriage proposal for a Castro resident who is depicted in the mural sitting on the scooter. The bottom of the mural, Deb paints the proposal: “Marry me?”, next to two heart shaped boxes. When the Castro resident who commissioned the mural proposed, his partner checked the “yes” heart-shaped box with aerosol paint to complete the mural! 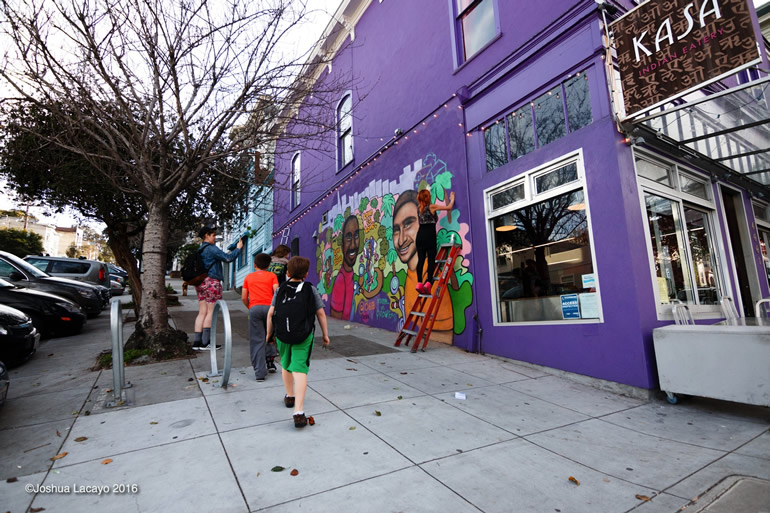 The mural was painted in only four days leading up to Valentine’s Day, the day of the proposal. Deb was rushed to complete the mural on time, but she still had time for and was frequently encouraged by curious Castro residents (including District 8 Supervisor Scott Wiener), and hundreds of people walking by the mural. Many of those people hugged her and thanked her profusely for painting such an important mural for the LGBT community, of which Deb is a strong ally. The message of love is clearly being conveyed and perpetuated by this fantastic piece of art. Congratulations to the happy couple! 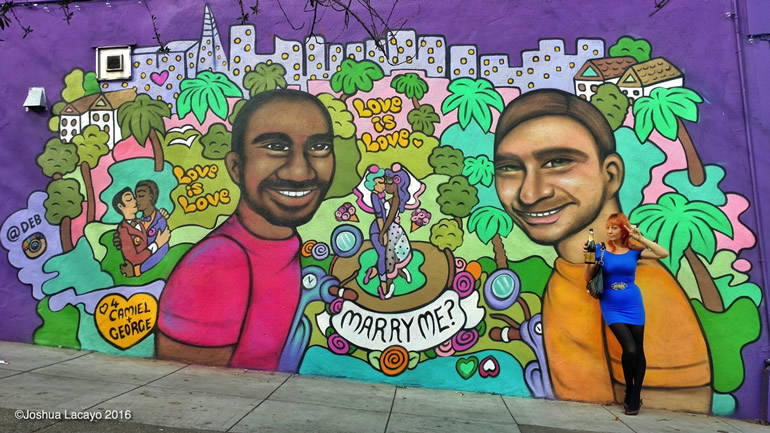 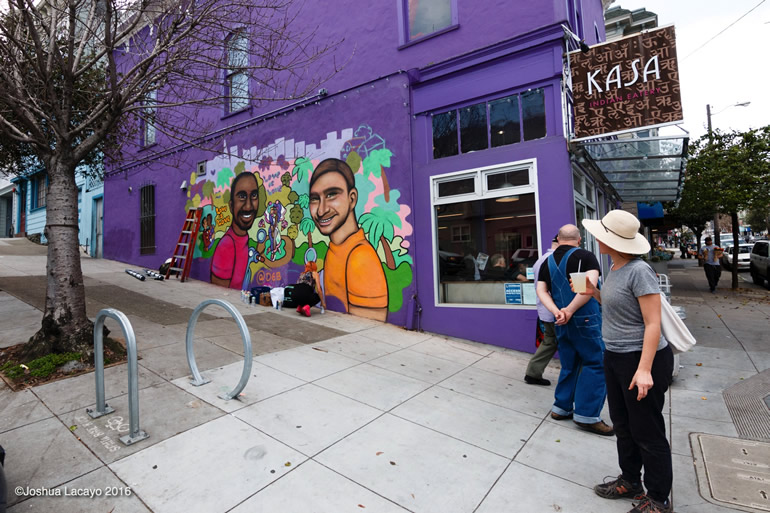 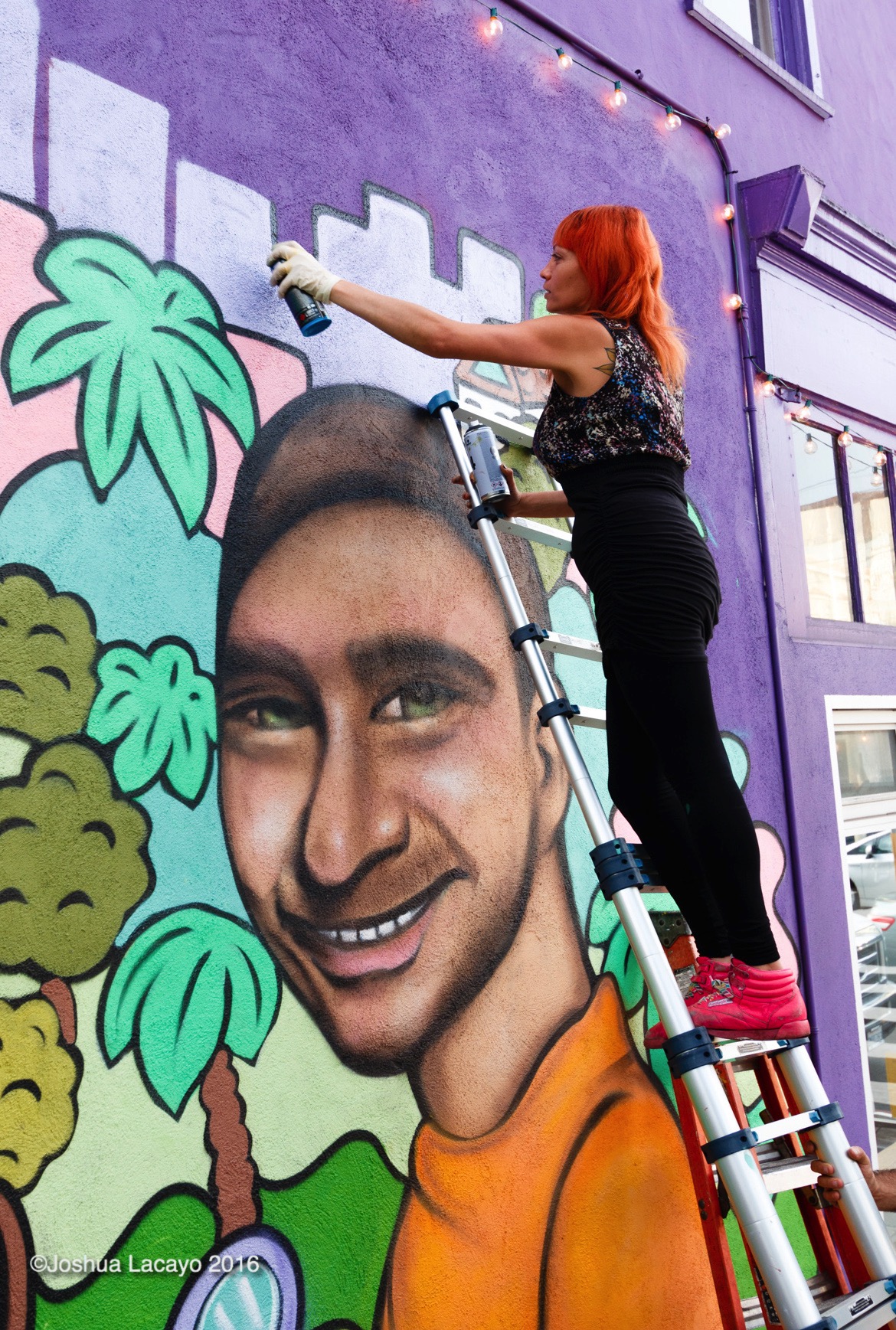