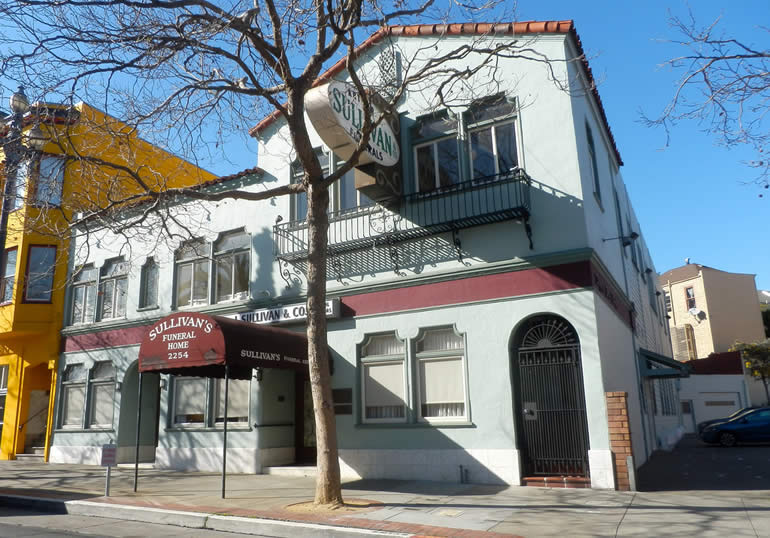 Three new floors are planned for Sullivan’s Funeral home on 2254 Market Street in the Castro San Francisco. This historic building, that has been apart of the community since 1942 and was a fixture during the peak of the AIDS crisis could soon be gone.

The expansion proposal includes the addition of new builds in the parking lot, the use of which is still undecided. Buildings in the parking lot directly adjacent to Sullivan’s could end up as residential suites, while Sullivan’s ground level location would most likely be converted into retail space, with an underground parking garage.

As most Castro Gay’s know, the gay neighborhood has seen a heavy influx of new construction over the last year as the economy recovers and the bubble that burst in 2006.

The word is still out if Sullivan’s will remain in the current space, relocate, or close altogether.

MyCastro will follow the details closely and keep you up-to-date.

Will you be sad to see Sullivan’s go? Are you excited for new retail, or should Sullivan’s be preserved as a historic landmark? Let us know in the comments below.

Organizers of the Preserving LGBT Historic Sites in California Facebook page argue that the building, erected in 1924, should be preserved because of the part the funeral home played during the AIDS crisis:

When AIDS swept the Castro, countless services for gay men were held at Sullivan's. In the early years of the epidemic, many mortuaries refused the bodies of those who had died of AIDS. According to a June 2006 AIDS timeline in the San Jose Mercury News, Sullivan's was a notable exception: Owner Jim Sullivan "lost a brother to AIDS, and his funeral home was one of the few in the city that would handle the funerals of AIDS victims."

The Planning Department has the building marked as a "potential historic resource," but it's not clear whether they are actively investigating the possible designation. We'll be sure to keep a close eye on this one and update you as details come to light.