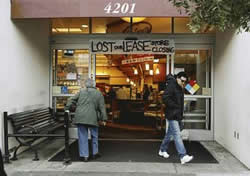 DeLano, who has logged more than a half-century in the supermarket business, started the chain in 2006 when he took over several Bay Area Cala Foods and Bell Market stores from the Kroger Co. He was the president of Cala Foods and Bell Markets in Northern California from 1990 to 1999. The Castro location has been a staple in the community for years. "All the stores aren't going to close, but some of them are," DeLano said before abruptly hanging up.

Employees who answered the phones at the DeLano's locations in the Castro San Francisco, Mission and Outer Richmond neighborhoods said that their stores would close within a couple of weeks. In Marin, employees at the DeLano's stores in Mill Valley and Belvedere-Tiburon said they will be closing, but employees at the Fairfax location said it plans to remain open. An employee at the Westlake IGA Market in Davis, also owned by DeLano, said he was unaware of any plans to close the store.

Some supermarket experts, as well as some competitors, said DeLano's Markets didn't do enough to lure customers, a sentiment that some Castro District residents agree with. "They had the wrong format for the locations," said John Sutti, founder of Burlingame's Sutti Associates, which designs and builds grocery stores. Sutti did not work for DeLano's. "They were too much of a nondescript, conventional grocer."

"I think the downfall here was that the stores didn't say much to the people living in those areas," he said. "They didn't walk in the store and say, 'This is my store.' Nothing made them want to shop there." The Castro demographic is specific, high end, and thus offerings should demonstrate these tastes.

Despite the economic downturn, Lempert said, many independent grocers, such as Mollie Stone's Markets in the Bay Area, are doing extremely well by establishing a personality that is reflected in their locations. Rumor has it Mollie Stones will be replacing Delanos old Castro San Francisco location.

The supermarket business is notorious for its razor-thin margins, and small independents face stiff price competition from bigger chains like Safeway, Trader Joe's and Whole Foods. But Lempert said that since DeLano's was affiliated with IGA - the Independent Grocers Alliance, a huge buying and brand alliance of 4,000 grocers worldwide, including 1,750 in the United States - it had enough purchasing power to compete on price.

At the DeLano's in the Castro, glum-faced employees hung signs Monday announcing the store's impending closure. Workers said they were told of the market's fate the day before Thanksgiving but weren't given a reason. Castro residents feel empathy for these employees. The Castro location, on 18th Street, will cease operation within two weeks, depending on how quickly the remaining inventory sells out, employees said. The store is offering 30 percent off most of its goods, and some shelves are already bare.

The news was a disappointment for neighbor David Grassi, who shops daily at the Castro location. He said he appreciated the store for its convenience and friendly employees. "The people are awfully nice," Grassi said. "They worked really hard. I hope another chain comes in and will re-employ them."

Other shoppers also said they would miss the chain's convenience. Many Castro residents frequented this location for that very reason.

"I could be upstairs in my condo making dinner and missing an ingredient and be able to run down, get it and run back up within five minutes," said Paul Burditch, who lives across the street.

But Burditch said the store had struggled to distinguish itself from other specialty food shops in the area, including chains like Whole Foods and the smaller Bi-Rite and Faletti Foods.

"You can't rely on convenience alone to be successful," said Burditch, adding that the selection at DeLano's wasn't as good as at some of its competitors.

Other customers complained about the store's prices, which they found to be high compared with competitors'. While Castro District residents are comfortable with a hefty price tag, they want the quality of the product to reflect the price. This wasn’t the case at Delano’s Henry Bineault walked into the market Monday afternoon looking for Pepsi. But the store's prices were much higher than those at nearby Safeway, he said, and so he left empty-handed.

"When you're poor, or you're on a fixed income, you've gotta shop around," he said.

Last year DeLano's shut two Marin locations, in Tiburon and Novato. Dennis DeLano, Harley DeLano's son and co-owner, told the Marin Independent Journal that the down economy was a factor in those closures. The Castro District hopes to avoid future business closings.