Dolores Park (originally known as Mission Park) is one of the most popular and loved parks in San Francisco — especially by gay San Francisco!

Located on 18th St. between Dolores and Church Streets, Dolores Park spreads it’s grassy roots across nearly 14 acres, holding six tennis courts, one basketball court, two soccer fields, a playground and a clubhouse with public restrooms. And, if you find the right spot, you can enjoy one of the best views in the city.

If you choose to spend a day at this glorious hot spot, you’ll never grow hungry, thirsty or bored. On a hot day, you can head over to Bi-Rite Creamery (3692 18th St) for some honey lavender or brown sugar with ginger caramel swirl ice cream. If you need a sandwich to complete your picnic, Ike’s Place (3489 16th St) has got you covered: Try a melt-in-your-mouth Ménage à Trois on Dutch Crunch or ultra-comforting Damon Bruce. You can also pick up your essential beer and munchies at 17th & Noe Market (3900 17th St).

If you look closely, you may notice a slight difference in tone on each side of Dolores Park (divided by the restroom clubhouse in the center). On one side of the park (northeast, alongside 18th) you have Hipster Hill, and on the southwest corner of the park (where all the great views are), you have Gay Beach (both names somewhat self-explanatory). It’s not a segregation of hate — San Franciscans’ just really like to name things. People of all sexual orientations and fashion tastes are welcome to squat anywhere at Dolores Park — but at least these names can help you to locate where your friends are sitting. 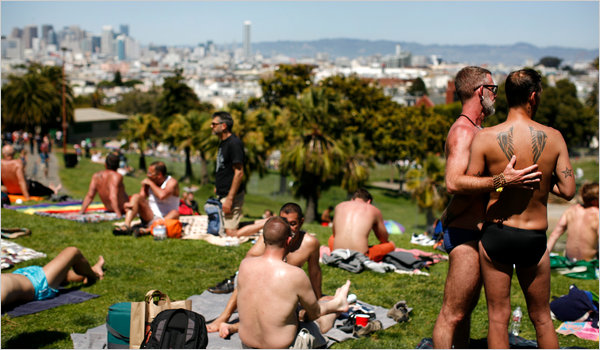 A Typical Day at Dolores Park

Being the neighborhood center to the Mission and Castro Districts, Dolores Park is sprinkled with many different people — and it’s a treat (most of the time) for all five senses. You may hear musical sounds from a random DJ booth, a drum circle or even a ukulele. You’ll see people playing Frisbee or catch with their dog, hula hooping, picnicking, or drinking a 40oz. You’ll smell delicious Mexican food, fresh air and grass, and the occasional puff of questionable smoke. (You may even get a visit from the “special” brownie guy.) But most of all, you’ll get a taste of the San Francisco lifestyle, and you’ll feel relaxed as you enjoy the beautiful weather and soak in some well needed sunshine.

Let’s Finish With a Brief History

Dolores Park was named after Miguel Hidalgo (El Grito de Dolores), a priest in Dolores, Mexico and the father of Mexican independence. The Mexican revolution was sparked by Hidalgo's ringing of the town's church bell and public cry for freedom. A statue of Hidalgo and replica of the church bell were erected in the park to honor him and the town where it all began.

Dolores Park also used to be a cemetery, owned by Congregation Sherith Israel and Congregation Emanu-El, which became inactive in 1894. The cemetery was moved to San Mateo County and the graves now rest at Hills of Eternity and Home of Peace Cemeteries in Colma. (San Francisco land became too valuable for the dead and burial within the city limits became prohibited.)

The City of San Francisco bought Dolores Park in 1905 for nearly $300,000. Soon after, the park served as a refugee camp for more than 1600 families that became homeless by the earthquake in 1906. In 1917, the J-Church Muni streetcar line, which runs through Church Street and through one side of the park, began service. 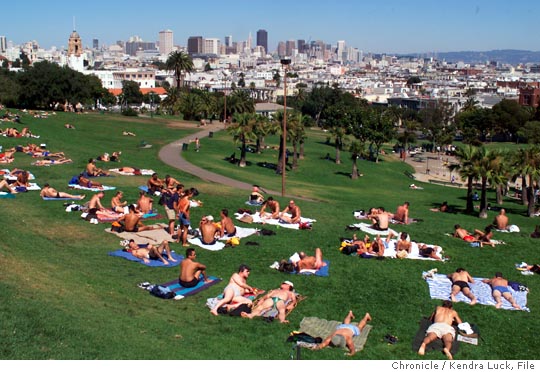 So if you’re in the city and the weather’s pretty — come one over to Dolores Park and enjoy the sunshine!