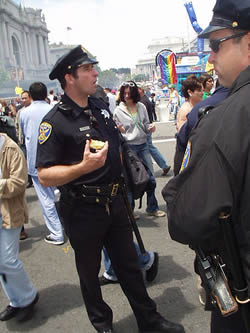 COPS volunteers don't break up fights or try to make arrests, but they do develop very close ties with local law enforcement and community groups, and they call in professional responders when they observe something that needs law enforcement, fire, or medical attention. "The COPS model is an extremely valuable one for many neighborhoods," notes Ken Craig, Chief of Patrol for Community Patrol USA (CP-USA), the not for profit that helps neighborhoods and cities develop their own COPS groups. Ken is also one of the founding members of Castro Community on Patrol and its longest serving board member. "COPS entities became a new partner in crime fighting within the last 25 years or so, with countries and cities all over the world adopting the idea of volunteer citizens forming their own safety patrols to help out local law enforcement.

Some COPS groups are formed by local law enforcement departments, while others are formed independently, as CCOP was, yet work very closely and cooperatively with local law enforcement, community groups, and governmental representatives." Training citizens to become better witnesses, capable first reporters, and helping them to engage in enhancing the overall safety and security of their own neighborhoods is precisely the focus of the COPS model. "It's a deceptively simple model, that has benefits far beyond patrolling the community," notes Ken. "The CCOP organization has become a recognized and respected part of the safety and security fabric of the Castro. working with SFPD, Patrol Special Police, and numerous other community organizations for the benefit of all." "Establishing a Duboce Triangle community On Patrol Service entity is a positive step for the overall community, and both CP-USA and CCOP are committed to assisting the Duboce Triangle Neighborhood Association to achieve that goal." Duboce Triangle patrol volunteers will undergo a three hour training class provided by CP-USA with the assistance of CCOP to prepare them for foot, bicycle, or motor vehicle patrols.

They will then patrol with more experienced patrollers from either CP-USA or CCOP for a minimum of four patrols in order to be considered a full patrol volunteer. A group of volunteers will also comprise the organizing staff for the patrol, to schedule patrols, develop community relations and maintain communications with law enforcement. DTNA and CP-USA will host a number of meetings over the next few months to promote the DT-COPS concept to neighbors and community members. If you would like more information, or would like to volunteer for the Duboce Triangle COPS group, please send an e-mail to: