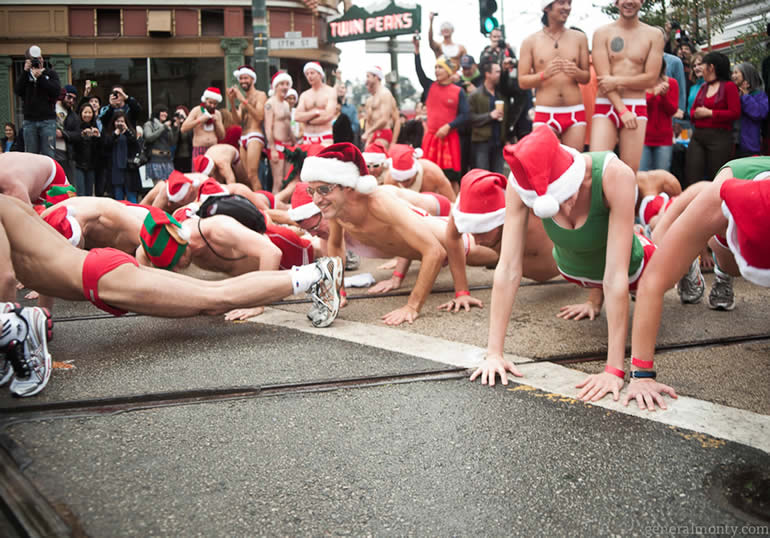 We aren't entirely sure when "Santa Claus" and "stripping down" became mutually exclusive. Especially when you consider how darn it must be to run around SF in little-to-no clothing!

But it seems that the trend is expanding past the ever-so-popular Naked Santa Run, and giving back in the process.

San Francisco AIDS foundation is the brain child behind the Santa Skivvies Run, a city-wide jaunt that acts as SFAF's holiday edition of raising awareness about HIV/AIDS and having a little fun in the process. Like all of SFAF's most popular fundraisers, the Santa Skivvies run encourages anyone and everyone to participate in the fun. As long as you have festive running wear, you are invited to participate! Feel like donning nothing more than a Santa hat and tighty whiteys? More power to you!

In the spirit of giving back, all participants will get their own fundraising page to help scoop up funds. Proceeds go to SFAF services such as free testing, prevention and support for the community. And of course, those who reach certain "money-raising goals" get prizes and stuff.

The self-proclaimed "festive romp" --which is celebrating its fifth annual installment--features a 1.6 mile route from the UN Plaza to the intersection of Market and Noe Streets in the Castro. The end location is conveniently at thee doorstep of Lookout, which has been successfully sponsoring Santa Skivvies in its early years. The fundraiser's website also tells us that there will be a block party once you cross the finish line--because god forbid the Castro miss out on an opportunity to have a street party! Information on the afterparty have not been released yet.

The SFAF Santa Skivvies Run will take place on Saturday, December 6 at 9 am. For more information please visit the event's site http://dev.santaskivviesrun.org