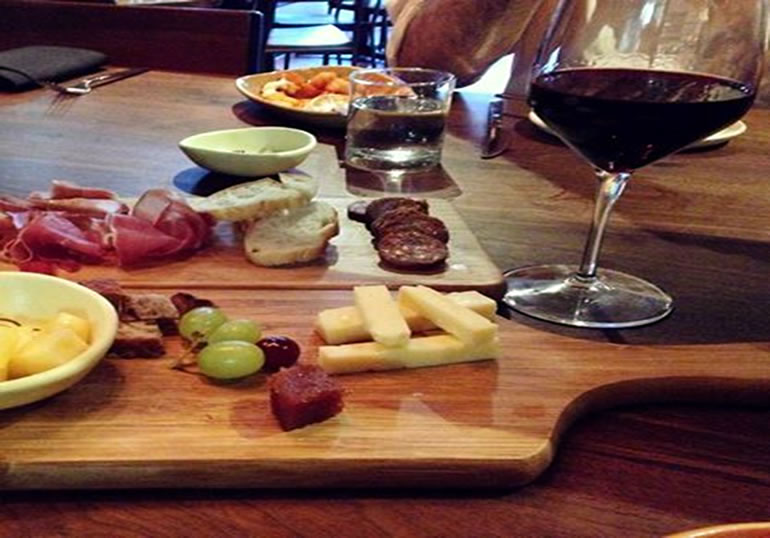 Chef Nick Ronan certainly doesn't strike you as the man behind the bistronomia evolution.

When I sat down with the master chef at Beso--the new, spicy Spanish sister to the Castro's French eatery Bisou--to talk about the three-week-old tapas restaurant and delicious cuisine behind it, I learned not just about the incredible food but also the amazing people behind the scenes that have helped cultivate Beso's early success.

But my meet with Ronan and chef Lorenzo Fajardo, in the intimate confines of Beso mid-afternoon before it opened to the public, was so inviting that I almost forgot what incredible company I was in.

Which is what makes Beso such a quick success--top-quality cuisine that is accessible to all, both inside the Casto community and beyond.

Not surprising, considering that the restaurant has already drawn people back to it a second or third time, Ronan tells me. Right off the bat he describes the first few weeks of business at Beso as garnering a "passionate energy." Quite appropriate given the vibe echoing through Beso's walls--dark wood and clean lines. Inviting yet a bit romantic. Perfect for gathering with friends or snuggling up to share a few glasses of wine and some panceta with your sweety.

"The concept of the group, is actually to elevate the essence and word 'bistro' into 'Bistronomy,'" Ronan tells me.

And that's just the decor. We haven't even touched on the food yet.

Beso pulls from exclusive farm, Napa Kitchen Gardens, bringing sustainable produce into Beso's kitchens."We use the exact same (components) of the high-end restaurants, using our own farm. But we are giving it to the masses." The grand foodiers work with the Food Manager to bring optimum components into their kitchens. Their Northern California Bistronomy Center--on the same property as the farm--works with both Bisou and its Catalan tapas counterpart to "create amazing tastes straight from the garden."

Mix their own produce with choice meats straight from Spain, and you get a few of Beso's choice dishes. Fajardo tells me about the care that is taken in preparing the panceta, a delicacy served with oyster mushrooms and pickled pearl onions. It's dish that the restaurant is particularly proud of not just because of the choice of meat, but because of the "technique" being used to put it on a plate. So good it "melts" when you eat it.

And if my mouth wasn't watering enough, the chefs tell me about the paella. Clams, mussels, so many things to dance on your tongue. And the best part: Unlike so many restaurants in the fine city of San Francisco, you don't have to spend your whole paycheck to eat like a god.

"You don't have to be a celebrity," Ronan proclaims. "We'll kiss you, we'll hug you, we'll sit down and have a drink with you. That's the 'Bistronomy.'"

Beso Bistronomia is open seven days a week, 5pm to 11pm--with a possibility of brunch hours later this month-- at 4058 18th Street between Castro and Hartford. You can make a reservation at besosf.com