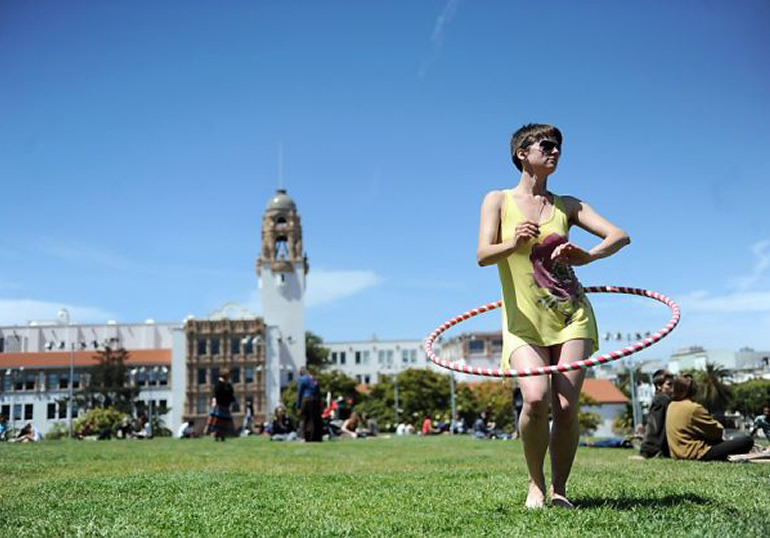 Watch out Gay Beach, the hipsters are coming: Hipster Hill at Dolores Park in the Castro District is closing for six months on March 13th, 2014. Hipster Hill takes up the northern half of the park (along with Fixie Flats and the tennis courts) — so all those folks are bound to invade the sweet, sweet territory we know as Gay Beach.

Last Saturday there was a groundbreaking ceremony introducing the 14-month major Dolores Park improvement plan. The ceremony was held at 10a.m. at the park near 18th and Church streets, with appearances from SF Rec and Park general manager Phil Ginsburg and San Francisco Supervisor Scott Wiener.

The project will give Dolores Park a facelift, with new and improved facilities including new bathrooms, renovated tennis and basketball courts, off-leash dog play areas, new bike racks, new paths, a overlook area in the southeast corner, and an improved irrigation system.

So what does this mean for Gay Beach? Fortunately, the playground will remain open so your kids can stay happy and entertained. This merge does, however, bring up some interesting issues. Jay Barmann from the SFist gives some advice to help us get through this as smoothly as possible:

"Hipster Hill Folks: Leave your bikes at home. Seriously. Half the picnicking real estate of the park is disappearing and we're all going to have to make do with less, so your pile of bicycles no longer has a place next to your blanket. Use your feet. It's a great walking city.

Gay Beach Fans: Try to keep cat-calling to a minimum. Many of those fey boys with beards and good haircuts are, in fact — believe it or not — heterosexual. Also, while the crook of the elbow is likely always to be a well bronzed, occasionally Speedo'd sausage fest on the sunniest of days, try to share the edges of the shelf like good citizens. We're all in this together, and some of us can not afford fancy restaurant birthdays and will need to have them here."

Renovations will begin with new restrooms at the center of a park and new path that runs diagonally from those restrooms to 18th and Church Streets. The second part of the renovations (set to take place in fall/winter) will be the construction of a new overlook area near 20th and Church Streets and another new bathroom for the kiddies and their parents near the playground.

How do you feel about sharing Gay Beach for six months? What issues do you think may arise? Tell us in the comments!