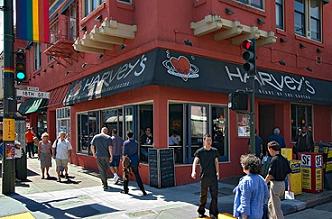 The Castro district of San Francisco has been a long time stomping ground for political movements, area counter culture and home for vibrant gay life. Within that district lies Harvey's, a bar and restaurant that has played a significant role in the history and development of the city.

The Castro was considered a quiet neighborhood in the 1960s with The Missouri Mule as it's only gay bar. In 1974, its present gay owner purchased the building on the corner of 18th and Castro. It wasn't until approximately a year later that Fred Rodgers and David Manducca, with the collaboration and encouragement of the owner, opened the Elephant Walk bar/restaurant in the space formerly occupied by Anderson's Pharmacy at 500 Castro St . During that time, Castro neighborhood merchant, Harvey Milk owned and operated a camera shop up the street from The Elephant Walk. He praised the bar and hailed it as a place where the gay community could meet, feel safe and secure while at the same time be visible to the whole world. Milk soon became known for his passion and was dubbed the "Mayor of the Castro" --a title that suited him well and permitted him to be a voice and heart for the community.

The bar began to thrive as people within the community embraced their sexuality. The Elephant Walk brought the community together and in the 1970s became a venue for internationally renowned singer and performer Sylvester . As gay culture grew and the neighborhood took shape, Milk became increasingly inspired and motivated by his community's support. It wasn't long before he progressed from the Mayor of the Castro to becoming the first openly gay member elected to the San Francisco Board of Supervisors. Not only was this promotion a feat for Milk and his career, but for the gay community as well. 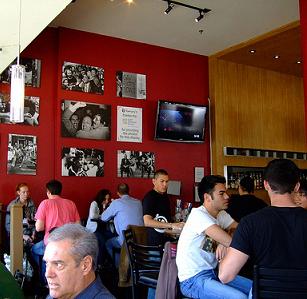 Milk's new role on the San Francisco Board of Supervisors was not without controversy. Tragically, on November 27th, 1978, both Harvey Milk and Mayor George Moscone were shot and killed in their City Hall offices by fellow board member Supervisor Dan White. On March 1, 1979 White was convicted of the crime but only charged with manslaughter. Outraged by the verdict, the community numbering in the thousands marched to City Hall in protest. During the march some isolated groups smashed windows, set trash cans ablaze, hurled bottles and rocks through windows and set fire to several police cars. In response to the riots the San Francisco police started one of their own. They targeted The Elephant Walk and began breaking the windows, damaging the property and beating the patrons inside the bar in rebuttal to the downtown riots. While the district mourned the loss of their "heart" they drew on strength from one another to cope with the blow to the community.

The Elephant Walk continued to thrive until December 2, 1988 when a fire nearly destroyed the building. It took four years and a lot of work to complete its' restoration. In 1996 the owner of the building reopened the bar as "Harvey's", in memory of the Great Harvey Milk. He was known the community over as a fun-loving person who would have loved the thought of a place where gay, lesbian, bisexual and transgendered people could thrive, raise gay consciousness and a sense of our history. More than a decade after its' opening, Harvey's has remained a historical monument and pillar to the gay community.

Today, the Castro district is known around the world as a place where gay, lesbian, bisexual and transgendered people live and work together. It is a major center for gay political and social activities, the location or many AIDS service agencies, the historic Castro Theater, Harvey Milk Plaza, the Gay and Lesbian Film Festival, the Castro Street Fair, Gay Pride Week, Halloween festivities, as well as many other events. The Castro is also the destination of the famed F Street surface trolley line featuring colorful historic trolleys from around the world. Though the Castro district has undergone many changes as its' community grows, through it all Harvey's has been its' heart. It is our wish to encourage all people to visit the Castro district, get to know its' people which, in turn, will allow our acceptance and appreciation of one another's' differences to grow.

This article appears on the Harvey's Restaurant and Bar website: http://harveyssf.com/about.html