Posted on www.sanfranciscosentinel.com
By SF Sentinel 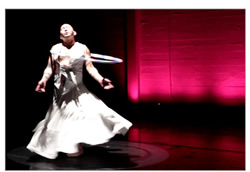 My Castro San Francisco is pleased to share with you an amazing entertainment event that cannot be missed. Hoops, juggling, Maori Poi and other forms of movement with unique props will be given a decidedly contemporary spin in THE FLOW SHOW 3, one of the most unusual and engaging movement theater events in San Francisco.  25 artists will perform Friday and Saturday, April 29th and 30th at 8:00 pm, and Sunday, May 1st, at 7:00 pm at Dance Mission Theater, 3316 24th Street, San Francisco. Castro residents will be there in force!

Check of some of the features Castro San Francisco! The Flow Show 3 will feature group performances by The Vulcan Crew, known for their technical prowess, FIRISH who combine the Flow Arts with Irish step dance and the portal group known for a poetic/mystical aesthetic. Additionally, there will be club and ball juggling by the duo of Bri Crabtree and Brian Thompson, a hoop act by Revolva, a contact staff duet by FireSmoothie and freestyle sections, including one where random songs picked from the iPods of audience members will be used.  Contact juggling, partner poi and club manipulation will also be presented. Castro residents appreciate contact!

Many of the props used by the choreographers and performers in The Flow Show have long historical roots but are used as fresh fodder for innovative new performance works and genres. The ancient Greeks and Egyptians played with hoops; poi has been part of the Maori culture of New Zealand for as long; the staff has been used as a weapon in cultures around the world for millennia and clubs first appeared in India centuries ago. So get out there Castro San Francisco and treat your senses to some serious stimulation.

What is new are the ways the manipulation of these props have been fused with contemporary ideas of movement, dance and flow. The Flow Show 3 artists take vastly different approaches to the same props.  Known collectively as the flow arts, these ancient disciplines have fused with Burning Man, rave and circus cultures and although their ancient antecedents are visible in the contemporary works, the modern versions are new and constantly evolving. If you are at all interested in the arts you must attend this event Castro San Francisco.

Says Flow Show founder Khan Wong, “Often performing with fire, frequently as bit parts in circuses or as the floorshow accompanying a DJ set at dance parties, practitioners of the flow arts rarely have the opportunity to make what they do – the movement and the flow – the focus.  Rarely are these art forms presented as movement disciplines – as dance – in their own right.  This was the impetus behind this show.” We know that all of us here at My Castro San Francisco can appreciate a fire show with a DJ to boot!

Now in its third season, The Flow Show originated as a bit of a lark for Wong.  He had witnessed too many performances where the spinner or juggler’s act was background dressing or a side-act to a "main" event.  So he wondered what a stage show would be like, where the performances were presented as a form of dance-theater and the routines were more about artistic expression and less about the "ta-da!" moments typical of the traditional settings.  Many of the performers have taken the opportunity to craft acts different from their usual styles and approaches.

A call was put out, and many in the San Francisco spinning community stepped up to participate.  So get out there and support our local San Francisco residents! That first year, the show happened to fall the weekend before Firedrums, when a lot of the brightest lights in the international spinning world were already arriving in town for the annual camp-out/firejam/marathon geek out session.  It was a rare alignment, and a crowd estimated to be three times the legal capacity of the venue showed up and most were turned away.  The response by those who made it into the show was rapturous, and it was clear at the end of that first night that something bigger than a one-off show was born.

San Francisco is one of the key communities around the world where key innovations in the Flow Arts are happening.  Much of the development is driven by YouTube and other social media which allows for the global sharing of techniques and ideas, but the Bay Area is one of the few locations where a critical mass of practitioners live and play together in real time, physical space.