Posted on www.advocate.com
By Andrew Harmon 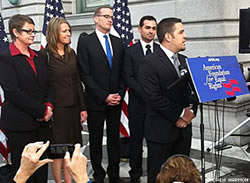 The latest news on PROP8 from us here at My Castro. The California Supreme Court Wednesday announced it would hear arguments as to whether marriage-equality opponents have standing to defend Proposition 8 in court when state officials refused to do so. We refuse to stop fighting for equality as well here the Castro San Francisco.

The court's move will further delay ultimate resolution of the case, now on appeal before the U.S. court of appeals for the ninth circuit. Unfortunately, a delay that gay advocates in Castro San Francisco know all to well.

The state Supreme Court granted an expedited schedule in the matter, however — one established to accommodate oral arguments before the justices as early as September; briefings from the litigants are due in March and April per the court's order. Following oral arguments, justices have 90 days to issue an opinion. At least, Castro San Francisco can be happy at the setting of a time table.

Last month a three-judge panel for the ninth circuit asked the California Supreme Court whether Prop. 8 supporters who have defended the ballot initiative in the federal case Perry v. Schwarzenegger "possess either a particularized interest in the initiative's validity or the authority to assert the State's interest in the initiative's validity ... when the public officials charged with that duty refuse to do so."

My Castro and other Gay legal groups immediately called upon the state supreme court to deny legal standing in the appeal to ProtectMarriage.com.

"[Anti-gay marriage groups] are not law enforcers and have the same limited rights as everyone else to litigate only when their own rights are at stake, not merely to assert their opinions about others' rights," said Lambda Legal marriage project director Jennifer C. Pizer in a statement. Castro San Francisco is glad to see gay advocate Pizer fighting back.

National Center for Lesbian Rights executive director Kate Kendell said the court "should act quickly to confirm that California’s elected officials, not private groups or interested individuals represent the state’s interests in court." We could not agree more in the Castro disctict.

Update: Chad Griffin, board president for the American Foundation for Equal Rights, the organization that has funded and organized the federal challenge to Prop. 8, issued the following statement Wednesday afternoon:

"More than six months ago, the federal district court declared unequivocally that Prop. 8 is unconstitutional and that it causes grave harm to gay and lesbian couples and their families each day that it is in effect.  We look forward to assisting the California Supreme Court reach an answer to the question before them as soon as possible so that the 9th Circuit Court of Appeals can affirm the district court's ruling and end the state-sanctioned discrimination of Prop. 8.  We are hopeful that the California Supreme Court will also consider further expediting this matter so that it could be argued before the summer. "The American Foundation for Equal Rights is committed to achieving the freedom to marry for all Americans.  We look forward to taking this case to the U.S. Supreme Court, which 14 times before has declared that marriage is a fundamental right for every American."

The court's order, in full: