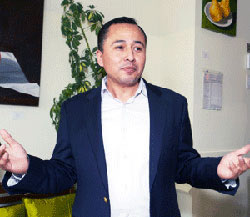 The state's largest LGBT advocacy group, Equality California, is pondering what action to take, if any, in response to the new political boundaries for California's legislative and congressional districts.

The state's Citizens Redistricting Commission signed off on the redrawn lines Monday, August 15. Shortly after the panel's vote numerous organizations voiced concerns about the panel's decisions and suggested they would take steps to challenge the new boundaries.

One group, the National Association of Latino Elected and Appointed Officials Educational Fund, issued a statement that afternoon saying it was closely reviewing the maps to determine if they dilute the Latino vote and if "litigation is warranted."

EQCA has also voiced concerns about the new maps in terms of how they impact LGBT voters in several cities around the state. Several organizations have started informal talks with EQCA about joining any legal action against the new maps.

But Guerrero noted that drawing the lines is a balancing act that calls for some give and take between competing interests.

"I think no one is going to be 100 percent happy here," he said. "I think the lines generally were beneficial to the communities of interest we identified. However, there are shortcomings."

Republicans are also looking at how to contest the maps, particularly for the state Senate, as they are expected to see their clout be further reduced in the Statehouse. The GOP, in addition to threatening its own legal action, has openly discussed going back to the ballot in order to redraw the lines.

Openly gay state Senator Mark Leno (D-San Francisco), who will run for re-election next year for the new, lone San Francisco Senate seat, said the GOP critiques are a case of "sour grapes."

"It is somewhat ironic that the party so eager for an independent citizens commission is now crying they don't like the outcome. The vote on the commission was a resounding 13 to 1," said Leno. "It is a bit of sour grapes."

Expecting that the new maps for the state's 53 congressional, 40 state Senate, 80 state Assembly, and four state Board of Equalization districts will be challenged, the state Supreme Court issued an advisory this week noting that any citizen wishing to legally challenge the boundaries can do so by first submitting a petition online. A hard copy must also be filed with the court by Thursday, September 29.

In a statement Frederick Ohlrich, the court's clerk-administrator, said the justices wanted to address any claims "in an expeditious manner" so that "future statewide elections, including the June 5, 2012 statewide primary election, can proceed as scheduled."

The redistricting process this year marked the first time that California's lawmakers did not have a hand in drawing new political boundaries based on the decennial census count. It also was the first time that LGBT people were considered to be a community of interest that should be given special attention when determining how to carve up the Golden State into the new state Assembly and Senate districts as well as congressional seats.

Nonetheless, some LGBT neighborhoods did not fair as well as others, including in San Jose and Los Angeles County. Already one gay Assembly candidate in West Hollywood, City Councilman Jeff Prang, bowed out due to the redrawn maps, while speculation is building that two gay politicians with eyes on a Silicon Valley Assembly seat, Santa Clara County Supervisor Ken Yeager and Campbell City Councilman Evan Low, will also suspend their campaigns so as not to take on incumbent Assemblyman Paul Fong, who is Low's boss.

One gay Assembly candidate who is hoping to see changes in how the Los Angeles basin was carved up is Luis Lopez. The Latino political activist is running for the new 51st Assembly District even though his Silver Lake home ended up in the new 43rd Assembly District seat.

"I am very close to the border. We are talking less than a block away," said Lopez.

Unless the boundaries are changed, Lopez will have to move into the adjacent district in order to continue his campaign for that seat, opt to run for the other district he now resides in, or bow out entirely. He told the Bay Area Reporter this week he plans to continue campaigning as he waits to see what happens.

"This is still in play. I am keeping my options open," Lopez said.

Prior to the redistricting commission's final meeting this week, EQCA Executive Director Roland Palencia sent the panel a letter thanking it for recognizing the LGBT community "as a unique community of interest." But he also wrote "some concerns remain."

In the August 4 letter Palencia singled out Assembly Districts in the Oakland Hills and northwest San Jose where LGBT neighborhoods "are split." In terms of the Senate, Palencia said EQCA had concerns with how LGBT areas in San Jose and Long Beach's Belmont Shores area ended up in different districts.

And in Pasadena and San Diego, EQCA expressed concerns with how the redistricting panel carved up those cities' gayborhoods into multiple congressional districts. "We urge you to take a look at Assembly, Senate, and congressional districts where LGBT COI have not been kept whole and that you adjust them in order to keep these communities intact," wrote Palencia, using the acronym for communities of interest.

Before it makes a decision on how to proceed, EQCA's Guerrero said the group will first take into account such things as what is the likelihood a legal challenge can win and how much such a fight would cost it. It already is bracing for an expensive campaign to protect a newly enacted state law that requires public schools to teach about LGBT history.

"There is a number of things to be considered, but we are not there yet," said Guerrero.

Asked if he agreed with the concerns EQCA has raised, Leno declined to discuss specific political boundaries he finds questionable. But he did express general agreement with the views expressed by Palencia in his letter.

"Without getting into any detail, I am more pleased with some decisions the commission made than others. But it is a total package," said Leno.

Overall, there is a good chance of seeing the LGBT Legislative Caucus in the statehouse grow next year, predicted Leno. It currently stands at seven members, with all but one up for re-election next year.

"There is a good chance that the caucus may grow and, naturally over time, it will continue to grow," he said.

With lesbians running for Assembly seats in Stockton and Santa Monica, they could bump up the caucus to eight members by December 2012 should they and the incumbents win their races. That number could climb depending on how many additional out candidates end up on the ballot next year.

As of now, it appears the state Senate will have one out member following the 2012 election. Lesbian state Senator Christine Kehoe (D-San Diego) is termed out of her seat next year, and Leno, so far, is the only declared LGBT Senate candidate.