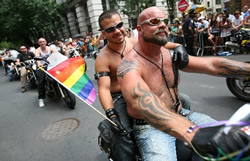 San Francisco's LGBT Pride Parade and celebration has come a long way. That much was obvious as hundreds of thousands of people gathered last weekend for the 40th annual event.

"It seemed like people were having a great time," said Amy Andre, executive director of the San Francisco LGBT Pride Celebration Committee.

She said Pride officials don't have an official crowd estimate, but from what people told her, this year's attendance seemed up even from last year, when there was an estimate of at least a million people. San Francisco police typically do not provide crowd estimates.

Sunday, June 27, a diverse crowd danced, mingled, and took photos of each other at the festival in Civic Center amidst numerous food booths and stages offering everything from country and western to Latin rhythms.

Blocks away, an hours-long parade with more than 200 contingents, ranging from the Walt Disney Family Museum to San Francisco Leather Pride, rolled by. Also Sunday, the Backstreet Boys were among the crowd pleasers performing on the main stage.

Audrey Joseph, who produced the main stage, said in a phone message that on Saturday, June 26, there were "a few technical glitches," but "all in all, Sunday was a dream."

She added that her staff "rose to the occasion at every turn."

Many people displayed their pride Sunday by wearing rainbow wristbands and necklaces or distributing condoms.

Forty years ago, Pride started out as a much smaller gathering to mark the first anniversary of the 1969 Stonewall riots, where patrons of a New York City bar stood up to police and sparked the modern gay rights movement.

These days, there are still signs that people are concerned about politics.

A block away from City Hall, a small group of people wore T-shirts that said, "End 'Don't Ask, Don't Tell,'" referring to the military's ban on out service members. Retired Navy Commander Zoe Dunning, who successfully fought her discharge under the policy, was one of the celebrity grand marshals.

Nearby, Susa Purugganan, who is 33 and straight, said she'd been to the Pride Parade before, but Sunday was her first time going to the festival. She came to support the community.

"It's really important right now because of what's going on politically" with LGBT rights, said Purugganan.

The celebratory nature of Pride weekend was marred by a shooting in the Castro near the end of the Pink Saturday party.

Purugganan said despite Saturday's shooting, "I'm not afraid by any means," noting there can be a potential for violence any time there's a large crowd.

Alton G., who didn't want to give his full last name,looked like he was interested strictly in having a good time.

Wearing nothing but skimpy pink briefs with a Blackberry tucked in them, he said he did feel less safe at the event, "but we've waited all year for this, so we might as well enjoy it."

Alton, who is 23 and gay, was making his first visit to San Francisco's Pride celebration. He'd recently moved to the city from New York.

It was also the first Pride for Gail Benson, 37, who lives in El Cerrito and declined to state her sexual orientation.

Benson said because there were "people everywhere," she thought the event was "very exciting."

She said she'd just heard about the shooting, but it didn't make her feel any less safe.

As always, this year's festivities were free, but many appeared willing to provide the $5 requested donation.

Donations from the celebration have helped San Francisco Pride give back more than $1.6 million in grants since 1997.

Andre said it was too soon to say how much money was collected this year.

The Pink Saturday incident, in which one man was killed and two others were injured near Castro and Market streets, was on people's minds Sunday.

"Our hearts go out to the families of the people impacted by what happened on Saturday night," Andre said of the shooting that occurred Saturday night, which is organized by the Sisters of Perpetual Indulgence and is not an official Pride event.

Police also responded to other calls over the weekend.

An incident occurred early Saturday outside 440 Castro at about 1:30 or 1:45 a.m., just after Ray Tilton, a gay man who lives in Santa Rosa, had left the Castro area bar.

Tilton, 47, who was Mr. San Francisco Leather in 1990, reported that someone from a passing group of four people had attempted to get the wallet of one of his friends by grabbing the wallet chain.

He said he and his friend had a brief exchange about what had just happened when the four people came back to them and one of Tilton's other friends got punched.

He said he tried to step in between them, but he was thrown to the ground. He said one of the alleged assailants got on top of him and put his knee in the middle of his back and punched the back of his head. The other three proceeded to punch and kick Tilton in the head and face, among other places, he said.

He also said, "There was so much noise and commotion going on by this point I couldn't clearly make out much of what was being said at all."

Tilton said the 440 staff pulled him into the bar, which had closed by then. He and his three friends then went to an apartment at 17th and Hartford streets to "regroup," then walked to 17th and Diamond streets, where Tilton was staying.

He said as they left the first apartment, the four alleged assailants were waiting for them.

Tilton said they were taunting him and his friends, saying things like, "We're going to get you." He said he couldn't remember them saying anything anti-gay.

He said at that point, a friend called the police. He didn't know why the police weren't called before.

He said he and his friends took refuge in the doorway of Orphan Andy's, a nearby diner. At the same time, he said, the four other people sat down at a table at 17th Street Plaza, which is outside the diner.

Between 2 and 3 a.m., the police and an ambulance arrived, said Tilton. He said that while he was in the ambulance, the alleged assailants were brought to the door one by one so he could identify them. He said the ambulance driver held his hand during the process and "the police were great."

Tilton said that he and the others were surprised the other four hadn't run when police arrived.

"I don't know if they were trying to wait for us again to come from Orphan Andy's or if they were so stupid they didn't realize we were calling the police," said Tilton.

Tilton said all four were arrested at the scene. Lieutenant Lyn Tomioka, a spokeswoman for the San Francisco Police Department, said Otis Cooley, 28, of Emeryville; Derek Price, 27, of San Leandro; Laselle Manning, 31, of Mesa, California; and Deonsay Roberts, who will be 19 in July and lives in Oakland were all cited for misdemeanor battery and released. She said their court date is August 23.

Tilton has formed a Red Saturday group on Facebook to call attention to violence. He said there are plans to have a rally Saturday, July 3, at 6 p.m. at 17th Street Plaza.

Also on Saturday, according to Tomioka, there was one arrest for hit-and-run at the Dyke March involving somebody on a motorcycle.

In other events that occurred Saturday, four intoxicated people were temporarily detained, and there was also an arrest for malicious mischief to a police vehicle, said Tomioka.

She said on Sunday, June 27, at the Pride Parade, three intoxicated people were detained temporarily; there was one arrest for misdemeanor battery; and there was one citation for having an open container and urinating in public.