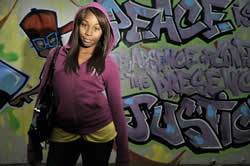 San Francisco has long attracted gay people escaping conservative towns, like pilgrims to a rainbow-colored mecca. Only here would the Sisters of Perpetual Indulgence qualify as the most ubiquitous "religious" figures. Only here is the word "pride" first associated with a gay parade along the city's main boulevard. Yet anyone who thinks gay teens raised in San Francisco have it easy was not there the day Rafique Franks got her wig snatched off in front of Mission High School. "It was hella ugly," Franks says with her usual panache while recalling the spectacle.

Franks was darting out of Mission High to the J-Church Muni stop on the corner, glad to have survived a day in the wig. It was a black-with-auburn-highlights layered job that even she will admit looked a little incongruous with a hoodie and jeans. While every teen goes through awkward stages, Franks had a harder road to go than most: Franks was born with the plumbing of a boy, but was increasingly realizing he was mentally wired female. While many transgender people — out of lack of information, out of fear, out of simple self-preservation — wait until adulthood to come to grips with their identity, Franks wasn't about to wait. Smack-dab in the middle of freshman year, he was coming to school some days as "he," others as "she." That day, all her identity was wrapped into the wig.

No sooner had Franks gotten down the school steps when the bully — the same bully as always — came up from behind, snatched off the fake hair, and laughed. Franks grew up flamboyantly feminine in rough patches of Visitacion Valley and the Bayview, and had an almost Darwinian adaptation of not showing weakness when things got to him. But there in front of Mission High, grabbing back for his wig in front of dozens of students pouring out of the school, Franks cracked. He cried and ran away. In another year, Franks would transfer schools.

For Priscilla Fallas, it wasn't coming out at Leadership High School that was the problem. The real battle for acceptance was at home. There, in the heart of the Mission on 24th Street, Fallas tried to keep up the straight act for her parents, Costa Rican immigrants whose preferred term for gay people was maricónes, faggots. For cover, she hung posters of the Jonas Brothers and Justin Timberlake on her bedroom walls. For senior prom, she threw on a dress she'd gotten free from a charity and posed with a guy friend as her mom happily snapped photos. She'd been squirreling away lunch money for weeks, and once at the Westin St. Francis for the dance, she changed into a rental outfit: slacks, a shirt, vest, and tie from Men's Wearhouse. She met up with the hottest bi-girl in the school as her date, and posed for prom photos her parents would never see.

Fallas, now 20, was one of the few youngsters who showed up at a recent vigil in the Castro for the numerous gay teens across the country who recently committed suicide. Rutgers University freshman Tyler Clementi jumped off a bridge after his roommate posted a video of him in an intimate encounter with a boy online. Closer to home, Seth Walsh, a 13-year-old from the desert town of Techachapi, Calif., hanged himself from a tree in his backyard after antigay bullying at school. In response, hundreds of gay celebrities and regular adults have recorded "It Gets Better" videos and posted them on YouTube, promising kids that if they stick out high school in their closed-minded locales, a better life awaits in urban capitals that will appreciate them.

Yet teen San Franciscans will tell you that ethos often doesn't define their lives at home. Many hail from swaths of the city that voted against gay marriage. With nearly 40 percent of the city's residents being born outside the country, many kids have parents from cultures that spurn gays just as much as any podunk town in the United States.

School is sometimes little better. Recent surveys of San Francisco public school students reveal that gay slurs are rampant. A staggering number of LGBT students have contemplated or attempted suicide (though district officials cannot recall a LGBT-identified student who actually did it). "High school was torture, basically," says one former Galileo Academy of Science and Technology student taunted as a "gay ass" in class. "Even though people assume this is a utopia for queer youth — it may be a utopia for older people that have overcome their issues, but for the adolescents, who are beginning their life, it's very difficult."

These kids circulate in the other San Francisco, the one that doesn't appear in the gay travel guides. It turns out that for kids living here, the Castro might as well be in another state.