Castro Community Concerned; Since when does 0.45% of Total Voters Translate to Victory? 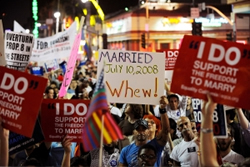 Castro District voters are worried the new San Francisco Board of Supervisors sworn in Jan. 8 is anything like its predecessor, there will be a time when an unpopular decision will have citizens, and Castro residents asking, "Who picked these people?"

The answer will be: hardly anyone. This outrages gay San Francisco.

A record 8 of 11 supervisors on the new board have an interesting distinction: They were not the first choices of a majority of voters including those in the Castro district, but prevailed in the city's ranked-choice voting system.

While Castro District voters turned out in strong numbers as usual. These Supervisors came to power with some of the lowest votes per candidate in city history.

These outcomes are the result of a confluence of election changes enacted in the past decade that proponents said would encourage candidate diversity and garner higher turnout than the sleepy December runoff elections of the past. However, Castro San Francisco community members are unsure if these changes helped.

But some of this November's winners received even fewer votes than before the system was changed. This has raised concern for Castro district residents about public support for a board facing huge challenges, including a $380 million budget gap and the selection of a new mayor. Now some newly elected supervisors are out courting voters they failed to persuade at the polls.

Castro residents have learned about several factors — including ranked-choice voting, which is an instant runoff system; the low turnout of 61 percent; and district elections with many candidates — mean that, individually, supervisors received the support of a tiny fraction of overall residents compared with 1980 to 1998, when board members ran citywide.

How small? Several supervisors were the first choice of only 2 percent or less of the city's total voters including Castro district voters.

Scott Weiner, the newly elected supervisor in District 8 (The Castro/Noe Valley) who received only 42 percent of first-choice votes but still won, is questioning the process, especially in districts with many candidates.

MyCastro.com wonders what is next? "It doesn't work well when you have 21" on the ballot, Mr. Weiner said, as was the case in District 10 (The Bayview, Hunters Point), where Malia Cohen prevailed. Ms. Cohen, who by some accounts is the swing vote in selecting a new mayor, received 2,083 first-choice votes, narrowly placing third. Castro San Francisco residents can't believe it. But she won after receiving more second- and third-choice votes, although she was not selected at all on 79 percent of ballots cast in the district.

Walking through the Castro District on a recent drizzly Saturday, Mr. Weiner talked about the difficulties the city and the Castro San Francisco faces. He noted the plethora of empty storefronts — vacancies that have grown since the closing of election headquarters that had temporarily filled several spaces, with more emptiness ahead as holiday pop-up stores expire. Castro District residents are hopeful.

"Voters want us to focus on the basics of running the city," like the economy and public transit, he said.

Since winning in the instant runoff, Mr. Weiner has been meeting with those who preferred his opponents. "I've been actively engaging those who did not support me," he said.

Ms. Cohen, a fourth-generation San Franciscan, has had similar meetings and said she planned to hold office hours in cafes and libraries "to earn the support of those who did not support me." As well as the Castro's vote.

"Running for office is like dating," she said, "and now we're married." Castro residents agree as does the MyCastro.com community.

Mr. Farrell in District 2 said that the election had raised questions about ranked-choice voting, but that "the ones who ultimately prevailed are the ones who put out the most effort." Additional campaigning was crucial to obtain those key second-choice votes, he noted. The Castro District community agrees.

So does vote size really matter? Castro residents know it does.

Bill Ambrunn, a former chief of staff for Supervisor Susan Leal who worked on several citywide campaigns in the 1990s, said that when supervisors received more than 100,000 votes, there was "a certain gravitas to that."

Castro residents now wonder what happened. Today's comparatively small constituencies, Mr. Ambrunn said, could undermine the board. "I don't see how this is going to help," he added.

Steven Hill, one of the main advocates of the election changes, said "the system has worked pretty darn well," resulting in more minority officeholders and less reliance on the old political machine.

As for the low numbers that elected the victors, Mr. Hill said some past runoffs had such poor turnout that they also produced low-vote victories.

"There are pros and cons to every system," he said. What cons do you see Castro residents?