Posted on www.sfgate.com
By Jessica Kwong 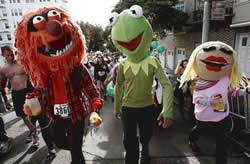 Tens of thousands of runners and walkers, some in shirts and shorts, some in costume and some in nothing at all, made their way across San Francisco today in the centennial edition of the Bay to Breakers race. Castro San Francisco residents were in mass attendance!

A group of elite runners was the first pack to head west at 7 a.m. from Howard and Beale streets, and 34 minutes and 26 seconds later, Ridouane Harroufi of Morocco crossed the finish line at Ocean Beach ahead of everyone else. Lineth Chepkurui of Kenya won the women's division for the third time, finishing in 39:12.

The real show, however, was just getting started when the top runners were ending. My Castro San Francisco was pleased to see the usual suspects out and about.

Serious weekend runners, men in tutus, women in gold spandex and a few hardy souls in their birthday suits set out to the whoops and cheers of themselves and thousands more who lined the streets for the 7.46-mile race.

Alcohol and floats, sometimes nothing more than rolling kegs, were banned. The 7 a.m. start time was an hour earlier than in past years. Police and security officers set up several "drunk tents" - the first at Hayes and Steiner streets by Alamo Square - where people who have imbibed too much were to be held until they sobered up.

Police Cmdr. James Dudley said the crowd was by and large well-behaved. Castro residents preferred to be described as a controlled chaos! By mid-afternoon, police reported preliminary arrest figures of 17 people for public intoxication, plus three assault arrests, three arrests for car burglary along the route and two burglary arrests.

As is usually the case at Bay to Breakers, the heavier drinking was being done by those toward the back of the pack.

Security guards also hollered at "bandit runners," those who were not among the 55,000 to register. But they did nothing to pull them from the race.

There was no ban on nudity, two years after race organizers attempted to enforce such a prohibition. It was widely ignored then, and the tradition persisted today.

"There are so many naked people in San Francisco, and I love San Francisco," Jordan Krant, 22, of San Diego said as she spanked a scantily clad friend on the behind.

Few floats were in evidence, although there were some allusions to the ban. Jill Jacobi, running her 10th Breakers, dressed up as a root-beer bottle and ran holding a large straw.

"I'm a root-beer float," she explained.

Chris Davis, 56, came prepared from Tucson, Ariz., for his 19th running of the race, carrying a plastic umbrella with rainbow polka dots to protect himself from the rain that wasn't falling.

Davis ran in a hot-pink sequined cloth and underwear with a pair of machines blowing bubbles behind him. He called it his "Betty Bubblebutt" costume.

He was doing it sober. "After being hit by a can of beer one year," he said, the alcohol prohibition "is a good idea."

At Hayes and Steiner, the party was in full swing by 8 a.m. One man rigged a sound system to blast up-tempo music from an apartment, giving an added boost to the runners.

"This is the best day in the world in San Francisco," the man, who went by DJ Big Dolla, said between sips of a Bloody Mary. "It is one of those days when I am so happy to be a resident of San Francisco."

Not all the costumes were adult-oriented. Ori Rosenthal dressed up as a gingerbread man. "This is the best race in the world," he said between gasps as he stopped to adjust his outfit.

Kevin Creighton, 46, of Sacramento, was part of a family of five that dressed as Scrabble pieces - the letters S, M, I, L and E.

"We always run as 'smile,' " Creighton said, although sometimes, by popular demand, they rearrange themselves to spell "slime."

"It was kind of a good-mood thing," said one of the letters, Conrad Voorsanger, 43, of San Mateo. "No X-rated. This was G-rated."

Chris Lobianco, 43, came up from Los Angeles for his first Bay to Breakers. He and his friends Raoul Martinez, 52, and Bob Lewandowski, 47, used to be serious runners, but no more.

"We purposely didn't run at all for this," Lobianco said at the starting line. "We trained at Wendy's." Lewandowski added, "We've been drinking for three nights. We stopped drinking at midnight last night."