Posted on www.Advocate.com
By Andrew Harmon 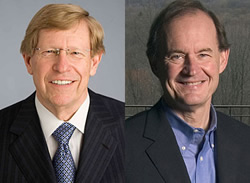 Here is that last for My Castro San Francisco readers on Prop 8. It's been 225 days since a federal district judge ruled that Proposition 8 "fails to advance any rational basis in singling out gay men and lesbians for denial of a marriage license."

But as Prop. 8 supporters pursue their appeal in the case, a stay on Judge Vaughn Walker's order to stop enforcing the ballot initiative continues. Castro San Francisco smiles knowing that the fight will never stop until equality is obtained.

Here on some of the key details for you to read Castro San Francisco. On Thursday, the legal team led by Ted Olson and David Boies reiterated their argument in support of immediately lifting that stay. "Proposition 8—and the stay that allows it to remain in force—is causing great damage. It is not merely deferring wedding dates," Olson wrote in a reply brief to the U.S. court of appeals for the ninth circuit. "For those near the end of life, it is denying the right to marry outright. A denial that Castro San Francisco will continue to battle. But beyond the damage done to loving couples’ wishes to marry, Proposition 8 carries an unmistakable message—transmitted and enforced by the State and tolerated by this Court—that gay men and lesbians are members of a class of persons unworthy of the fundamental right of marriage[.]" A message that takes the wind out of many of us in gay San Francisco.

So, where does that leave us now wonders residents of Castro San Francisco. It's unclear when a three-judge panel of the ninth circuit could decide whether to lift the stay or allow it to remain in place. An uncertainty that we all know too well in Castro San Francisco. In January, the panel in a certified question asked the California Supreme Court whether under state law proponents of a ballot initiative have the right to defend its constitutionality when state officials refuse to do so.

The crusade for equality continues for us in gay San Francisco. If Prop. 8 supporters are allowed standing to appeal, their arguments have been seriously undermined by attorney general Eric Holder's February announcement that laws discriminating against gays and lesbians warrant "heightened scrutiny" by the courts. "Proponents cannot seriously believe their assertions that the position of the chief law enforcement officers of the United States 'adds nothing of consequence' to this case," Olson wrote.