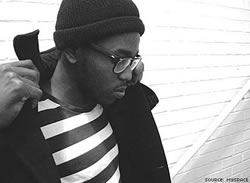 San Francisco Bay area–based musician Brontez says he was the victim of a hate crime Wednesday after leaving an urban hipster bar in Oakland.

Brontez reported the attack on his Facebook page: "Got gay bashed last night. Me and my bandmate, Adal, were leaving the Paradiso in downtown Oakland when two dudes with ... accents and dreadlocks started calling us 'batty boys' and saying that if we were in Jamaica we'd be dead."

Brontez alleges that he yelled back at the men and attempted to swiftly pedal away on his bicycle. "One of the guys chased me, punched me in the head and I fell of my bike. The other dude punched Adal fracturing his face in two places and now he has to have plates put in."

The musician says he's fighting back and "not sleeping on this shit. Oakland [police department] is not gonna care about us getting gay bashed. I can't even get them on the phone for a follow up."

SFist.com is urging potential witnesses to call the Oakland Police Department at (510) 777-3333.