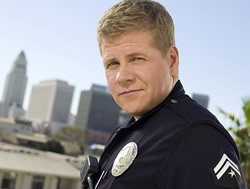 A gay police officer arrested a Baptist preacher in the UK last month for telling a passerby that homosexuality is a sin.

According to the Daily Telegraph, "Dale McAlpine was charged with causing 'harassment, alarm or distress' after a homosexual police community support officer (PCSO) overheard him reciting a number of 'sins' referred to in the Bible, including blasphemy, drunkenness and same-sex relationships."

Police say the 42-year-old McAlpine, who preaches in Cumbria, used insulting language in violation of the Public Order Act, introduced in 1986 to control rioters at football games. He was held in jail for seven hours on April 20.

Christian legal defenders say that McAlpine committed no crime in expressing his antigay beliefs, and that the law is being used to curb his religious free speech.

On the day of his arrest, McAlpine was approached by a woman on the street who debated him about his beliefs, during which time he said homosexuality is a sin. The woman complained to the nearby police community support officer (PCSO), who told the preacher he could be arrested for using homophobic language.

According to the Telegraph, "The street preacher said he told the PCSO: 'I am not homophobic but sometimes I do say that the Bible says homosexuality is a crime against the Creator.'

"He claims that the PCSO then said he was homosexual and identified himself as the Lesbian, Gay, Bisexual and Transgender liaison officer for Cumbria police. Mr McAlpine replied: 'It's still a sin.'

"The preacher then began a 20 minute sermon, in which he says he mentioned drunkenness and adultery, but not homosexuality. Three regular uniformed police officers arrived during the address, arrested Mr McAlpine and put him in the back of a police van."

McAlpine was released on bail and is now awaiting a trial date.