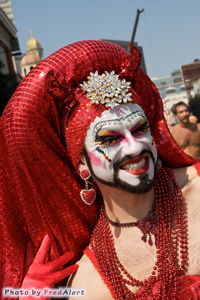 Folsom Street Events is a San Francisco-based nonprofit organization that produces some of the world's biggest and best leather and fetish events, including Bay of Pigs, Up Your Alley, Magnitude, and the notorious Folsom Street Fair. The agency's net profits are donated to local and national charities working primarily in areas of Public Health, Human Services and the Arts. Over its 26-year history, Folsom Street Events has given over $4 million to charity.

Folsom Street Fair, the grand finale of San Francisco Leather Week and the cornerstone fetish event of the year, is like nothing else in the world. It is a truly "only in San Francisco" experience with nearly 400,000 of your kinkiest international friends spread out over 13 city blocks of adult entertainment. Located on historic Folsom Street (between 7TH and 12TH Streets), leather and fetish players engage one another, drink, mix and mingle, and play right on the street for a full seven hours (11:00am – 6:00pm). Folsom Street Fair has won the San Francisco Bay Guardian's Readers' Poll for Best Street Fair for the past five years in a row.

With over 200 exhibitor booths, two live stages with top-name indie/alternative bands, the massive Magnitude dance area, a women's area ("Venus Playground"), and an erotic artists' area, you will be enticed all day long. Previous headliners of the Fair have included Berlin, Ladytron DJ Team, The Presets, My Life with the Thrill Kill Kult, Imperial Teen, Natalie Portman's Shaved Head, The English Beat, Shiny Toy Guns, M.E.N. (featuring JD Samson of Le Tigre), Blowoff with Bob Mould, TheSTART, Von Iva, and Dirty Sanchez. Folsom Street Fair is particularly unique in the diversity of its crowds – men, women, and transgender folks, people of all races and backgrounds, and fetish lovers of all kinds. Folsom Street Fair is always held on the last weekend of September. 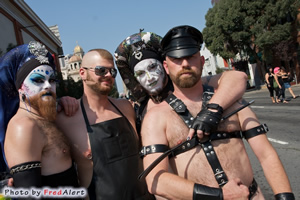 For details about Folsom Street Events, Folsom Street Fair, and San Francisco Leather Week, visit www.folsomstreetfair.org to see what all the fuss is about.