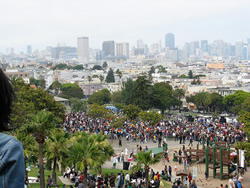 The San Francisco Dyke March believes in the importance of being visible, even if for some that means one single day of celebration with friends in the open air.

The rally showcases our community's outstanding artists, critical thinkers, and political activists. The thousands who attend are from all classes, nationalities and countries.

The San Francisco Dyke March is intergenerational, and varied in it's physical conditions. Coming together is that way; we truly embrace the reality that we are without borders – both nationally and culturally.

The strength we gather from this day comes with a message advocating justice for all Dykes against the varied oppressions we face in our particular lives every-where in the world and the message we are not alone in our struggles or our joys.

The SF Dyke March and rally are about claiming space, being visible in that space, and going into our daily lives expecting and receiving the respect deserved by all lesbians.

Facts About the Dyke March

The Dyke March is organized by a core committee with many volunteers. We are a multi-racial, multi-ethnic, cross-class and generation group of civil and social activists, intent on continuing a tradition of visibility for Dykes within the Pride celebration.

The Dyke March is funded through events and private donations from individuals and primarily dyke-owned businesses. There is no corporate control over the content of our gathering. We receive funding through the San Francisco Grants for the Arts/hotel tax fund.

Community Initiatives serves as the fiscal sponsor of the SF Dyke March.

The Making of the Dyke March

Organizing the SF Dyke March begins almost as soon as it happens. Our many volunteers and on-going good relations with the City of San Francisco's Police and Park & Rec. Departments combine to make the March an event to remember!

Visit our web site for the 2010 theme, the rally lineup, events in support of the March, international March info, images, a way to donate on line, and much more.

History of the Dyke March

At the 1992 LGBT March on Washington, a group of San Francisco lesbians organized a Dyke March, seeking greater lesbian visibility at this national forum.

In 1993, that same group organized a Dyke March in San Francisco and approximately 10,000 dykes marched. Eighteen years later, 50,000 attended the rally and marched through the streets of San Francisco, and that number keeps growing.

Accessibility is a key ingredient for the San Francisco Dyke March. To that end, we have accommodations to serve our elder/differently-abled population Parking space is reserved at a nearby garage, and a wheelchair accessible shuttle bustransports Dykes to and from Dolores Park. Accessible port-o-potties are located near the senior/special needs area. There is a special viewing area along the March route, with chairs, and the option of riding a motorized cable car in the March. Dykes in wheelchairs and their companions are welcome to form a contingent at the front of the March. ASL interpreters are on stage at all times. For detailed accommodation information, visit our web site: www.thedykemarch.org.

Hundreds of volunteers are needed for every aspect of the March, beginning with the core committee, which oversees the whole of the event, and members for the following committees: Access; Communication (web & all media)/Community Outreach; Facilities Management; Finance; Fundraising; Safety/Security; Stage; and Volunteer Coordination. We need volunteers for events (to work the events and to perform) and for outreach tabling and selling t-shirts around the Bay Area in the months prior to the March. A major need is volunteers for the day of the March/rally, June 26, 2010. All volunteers will be thanked via our web site and at a volunteer appreciation party in July.

Organizations and groups of friends are encouraged to work together at the Dyke March collecting donations and/or working in Safety/Security. We will thank your organization from the stage and on our web site.

Hold a house party - plan on an event!

Have fun & raise funds for the SF Dyke March. To learn how to hold a DM House Party, email us. If you have a venue & an idea for a fundraiser, we are all ears.