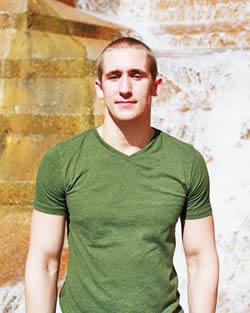 The Advocate: What has reaction been to your post?
Mason Wyler: I wouldn't say it's been universally positive — everyone has an opinion — it's a wide gamut of responses. For the most part it's been positive. Obviously, most people who would go to WylerNation are fans.

Isn't there danger involved in HIV-positive people having unprotected sex together?
I'm sure there is. I think right now the focus on HIV is safe sex [in regard to preventing HIV]; that's where most of the resources in terms of education goes. So there hasn't been that much education or information out there in terms of what the possibilities are for HIV-positive people having unprotected sex with one another. I think the last thing I really heard was the super HIV strain where a handful of guys in New York City progressed from HIV to AIDS very rapidly. But from what I read, it wasn't entirely conclusive that they got multiple strains and that it accelerated the progression. From what I heard, those people were also involved in heavy drug use, and that obviously takes a toll on your immune system.

So was reinfection of another HIV strain a concern to you?
It was a slight concern. Not really. I mean, if it was a major concern, I wouldn't have done it.

You wrote that part of the reason you filmed with the Hawks was that filming with people who are HIV-negative is uncomfortable. Can you elaborate?
I actually haven't had the experience of working with someone who I knew for sure was HIV-negative and they knew for sure I was HIV-positive. As soon as I tested positive, I stopped filming. The studio that my website is under pretty much just immediately transferred me over to Web cam shows only — solos only. My experience with [filming with HIV-negative people] is just from chatting with other models who are negative and have kind of hinted that they wouldn't be too comfortable working with me. So, obviously, if they're not comfortable, I'm not going to be comfortable. That's where it kind of started, and it set in that there is a chance that I could spread it to someone who's negative. I wouldn't want to cause someone direct harm or be at fault. I wouldn't want to pose that risk on somebody — even though condoms are 99% foolproof, there's still a chance.