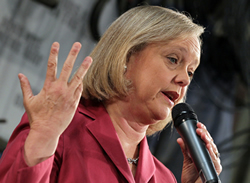 Gubernatorial candidate Meg Whitman said this afternoon that if elected governor, she would defend Proposition 8, which prohibits same-sex marriage, by appealing a recent federal court ruling declaring the proposition unconstitutional.

Whitman made her clearest stand to date on the issue while speaking at the warehouse of Solar Gard Window Film in San Diego, hours before she's scheduled to address the California Republican Party's convention downtown.

During a brief news conference, the Bee asked Whitman whether she would defend Proposition 8 if elected governor. The 9th U.S. Circuit Court of Appeals has taken up the issue after Chief Judge Vaughn Walker of the U.S. District Court of Northern California declared the measure unconstitutional earlier this month. Many residents of the Castro are not in support of Whitman and this latest statement only helps to further their discontent for her.

"The issue right now is, as I understand is 'Will Proposition 8 have the appropriate support to actually make an appeal to the circuit court of appeals?' " Whitman said. "And I think the governor, the attorney general today has to defend the constitution and has to enable the judicial process to go along and has to enable an appeal to go through. So if I was governor, I would give that ruling standing to be able to appeal to the circuit court."

The appeals court plans to hear the case in December, but Supreme Court appeals are planned by both sides, so Whitman would have plenty of time to intervene if she wins and takes office in January.

Whitman, whose campaign said in an ad that ran during the primary she would be "tough as nails" on illegal immigration, has come under attack from critics on the right who say she has softened her stance to pander to more moderate voters in the general election.

Whitman said her position on illegal immigration has not shifted and downplayed the impact of the different stances.

"No candidate will agree probably with every plank in a Republican platform or any party platform," she said, adding that she believes jobs and defeating Democrat Jerry Brown would ultimately unite the party.

The California Republican Assembly, which represents a more conservative faction of the party, is sponsoring a resolution to declare the party's support of the Arizona law and Proposition 187, the 1994 initiative to cease state services for undocumented immigrants.

Whitman, who has publicly opposed the Arizona law and Proposition 187, said she opposes the CRA-backed resolution.

"If we end up having a difference of opinion, it is what it is," she said. Some CRA members, including former President Mike Spence, have accused the Whitman campaign and its supporters of jockeying behind the scenes to mute debate on the issue by blocking the resolution.

Whitman said her campaign and supporters who are delegates are "letting the process unfold as it naturally does."

When asked whether her supporters were lobbying for votes to defeat the resolution, Whitman replied "that's how politics works."

"We're working see if, not to block, but to see if we can get our point of view across," she said, calling her plan to focus on securing the border the better course for addressing illegal immigration.

A CRP committee is scheduled to meet tomorrow to consider putting the resolution up for a vote among all delegates.

About the ongoing gubernatorial race, one reporter noted that Whitman has been tied with her Democratic rival Jerry Brown in the polls for months although she has spent tens of millions of dollars attacking Brown and touting her corporate credentials.

Whitman, the former CEO of online auction firm eBay, responded, "I am absolutely thrilled to death that we are where we are and I feel very good. I feel the momentum is on our side. The fact is we have a 2.3 million voter deficit in California. ... We look very good on independents. We've made progress on Latino Americans."

She also criticized Brown for what she was his lack of transparency in discussing his state pension.

"I think what he needs to do is to get CalPERS to release the data about his pensions and then there will be transparency and sunlight and it may be all fine," Whitman said. "But I think the question is why has it taken him so long to call on the release of those pensions from CalPERS?"

The Brown campaign has said it has asked the California Public Employees' Retirement System, or CalPERS, for just such a record, which the campaign will release.