The Road Ahead; Castro District San Francisco and Prop 8

Posted on www.advocate.com
By C.W Nevius

COMMENTARY: The last few weeks in the California marriage battles have been at once hopeful and painful. Castro community members look forward wondering what to expect next? First, we rode an ecstatic wave upward: Judge Vaughn Walker issued a powerful opinion striking down Proposition 8, and we celebrated in the streets both in the Castro and across the nation as couples made plans to get married across the state.

Then we rode downward when a three-judge panel of the U.S. court of appeals for the ninth circuit granted an indefinite stay of the decision - without explanation. Committed couples and their families, some of whom had begun making wedding plans, once again felt the pain of being denied not only a fundamental right but also the respect for and recognition of their love and commitment that only marriage offers.

The emotional ups and downs bring home a lesson we've learned repeatedly in the struggle for the freedom to marry: Victories don't come easily, and we must not let up until we've won conclusively. At this point there is so much that we cannot predict about the twists, turns, and ultimate result of the federal lawsuit challenging Prop. 8. But there are things we can each do to help bring about ultimate victory.

Between now and November 2, our priority is clear in California. We must do everything we can to elect Jerry Brown and Kamala Harris as governor and attorney general, respectively. That neither Gov. Arnold Schwarzenegger nor Atty. Gen. Brown was willing to put the state of California on record in defense of Prop. 8 in court made a tremendous difference. Both Brown and Harris have pledged to maintain the state's present position, while their Republican opponents, Meg Whitman and Steve Cooley, have both pledged to defend Prop. 8. There is consensus among legal experts that having the key constitutional officers of the state on our side refusing to defend Prop. 8, rather than arguing that the state has a compelling interest in defending the discriminatory measure, is a potential game-changer when an appeal is heard by the courts. 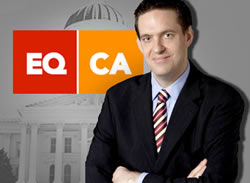 From Labor Day through Election Day, Equality California and its candidate political action committee will use every means at their disposal to elect Brown, Harris, and other California candidates who stand for full LGBT equality. We will have continuous volunteer phone banks at each of our field offices across the state, we will send hundreds of thousands of direct mail pieces, and will make our strongest case to our 600,000 members and to the entire LGBT and allied progressive communities of the critical importance in voting for a pro-equality slate. We will send a powerful message to all elected officials and candidates that we will hold officials accountable as we fight hard for our equality.

When a critical court case is pending, the governor and attorney general in particular are crucial — in ways we now know, and in ways we can't predict. From my time in Massachusetts fighting for marriage equality, I can recount horror stories of all the maneuvers that then-governor Mitt Romney employed in an attempt to block marriages from taking place in the state. In California we cannot let a Romney clone — a wealthy businessperson trying to burnish conservative credentials on the backs of LGBT people — get elected without a vigorous fight.

Beyond the electoral work, we must continuously build public support for the freedom to marry in California by sharing our stories of why marriage matters to us. In just the past year, we've together had hundreds of thousands of conversations and grown public support for marriage from 44% to 50%, according to polling by the Public Policy Institute of California. We've focused on - and made significant headway in — Latino and African-American communities.

We must continue to grow that support until we have a solid majority on our side. Judges do not issue rulings in the abstract. They cannot avoid looking at public opinion, the opinion of thought leaders, the positions of elected officials, and, of course, their own experience with LGBT people. This work not only best positions us for a court win; it prepares us for victory at the ballot even if we do not prevail in court.

Most immediately, we need to mobilize our LGBT and allied communities to elect leaders who support full equality. We have just over two months to do so, and we need all hands on deck.