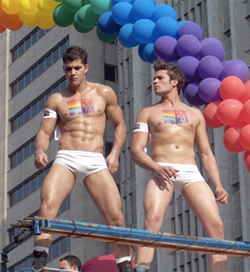 The theme for 2010 is "Forty and Fabulous" and the event will be held over the weekend of June 26 and 27, 2010. With over 200 parade contingents, 300 exhibitors, and more than a dozen community-run stages and venues, the San Francisco Pride Celebration and Parade is one of the largest gatherings of LGBT people and allies in the nation. The two-day celebration is free and open to all.

Gay Pride in San Francisco centers on a full weekend of parties, celebrations, and parades. The main events are a celebration at the San Francisco Civic Center on Saturday, June 26, from noon until 6 pm, and a Parade on Market Street on Sunday, June 27, at 10:30 am. This years 40th anniversary parade kicks off at the Embarcadero Plaza across from the magnificent Ferry Building (Market & Beal). The parade works its way along Market Street to the festival at Civic Center Plaza (Market & 8th St). The parade is followed by another celebration filled with music, dance, politics and a pulsating at Civic Center from noon until 7 pm that same day.

All day festivities include more than 300 vendors, artists, and other exhibitors; a slew of music and comedy acts playing on the Main Stage, and similar performances at Pride's other stages. This year as in many other years there will be a Marriage Equality Commitment Ceremony, with a performance by the San Francisco Gay Men's Chorus, on Saturday at 1 pm.

The Backstreet Boys will headline the main stage at this year's 40th anniversary LGBT Pride Parade and festival in San Francisco, the Bay Area Reporter reported Thursday. Other expected headliners include Rose Royce, Martha Davis and the Motels, and Andy Bell from Erasure. The Backstreet Boys are expected to perform mid-afternoon June 27. Exact performance times are pending. San Francisco Pride showcased Lady Gaga in 2008, before she became a more mainstream success, and hopes to continue the tradition with this year's roster of new talent, including Dangerous Muse, Hello Hollywood, and Hunter Valentine.

San Francisco Pride 2010 is sure to be a hit, a celebration in the California sunshine to support the worldwide LGBT community. You won’t be able to help but feel awed by the gay history that transpired in this beautiful city by the bay.

Of course, San Francisco has a rich and lengthy history of gay rights, and the city's Pride events are well-attended, well-organized, and are exciting and entertaining gatherings.

San Francisco like most other cities who celebrate pride in June, does so in part to honor what many consider to be one of the foremost events in the history of lesbian and gay rights, New York City's Stonewall Riots.

The Stonewall Riots commenced early in the morning on June 28, 1969. These riots were a series of demonstrations against a police raid at the Stonewall Inn, in the Greenwich Village neighborhood of New York City. The Stonewall Inn was one of the few establishments that welcomed openly gay people in the 1950s and 1960s. It catered to an assortment of patrons, but it was known to be popular with the poorest and most marginalized people in the gay community. Tensions between New York City police and gay residents of Greenwich Village erupted into more protests the next evening, and again several nights later. Within weeks, Village residents quickly organized into activist groups to concentrate efforts on establishing places for gays and lesbians to be open about their sexual orientation without fear of being arrested.

The Stonewall Riots are frequently cited as the first instance in American history when people in the homosexual community fought back against a government-sponsored system that persecuted sexual minorities. They have become the defining event that marked the start of the gay rights movement in the United States and around the world.

SF Pride is dedicated to the education and commemoration of LGBT heritage and to the celebration of LGBT culture and liberation. A world leader in the Pride movement, SF Pride is also a grant-giving organization through its Community Partners Program. Since 1997, SF Pride has granted over $1.6 million dollars from proceeds of the Pride Celebration and Parade to local non-profit LGBT organizations and those organizations serving the HIV/AIDS and breast cancer.

San Francisco Pride 2010 is sure to be the biggest and best gay event of this year.