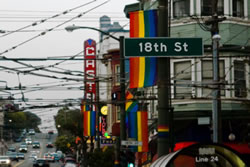 A crowd gathered at Market and Castro streets for the "Red Saturday" rally during which speakers, including Paul Henderson from the district attorney's office at right, urged the LGBT community to get involved in fighting crime.

Responding to several violent incidents that occurred during Pride weekend, local leaders and police this week appealed to the LGBT community for help in combating crime.

This year's Pride was marred by a shooting at the Pink Saturday street party in the Castro that left one man dead and two others wounded, a late-night assault against a former Mr. San Francisco Leather title holder, and a confrontation caught on video between a group of women and police in which punches were thrown and nightsticks swung.

Investigators have had particular difficulty in pursuing the Pink Saturday shooting. Despite occurring in the middle of a crowd of tens of thousands, few witnesses have stepped forward after the June 26 incident.

"There's been a minimum of cooperation from involved parties," said San Francisco Police Department homicide Inspector Kevin Jones. "From other celebrants, the response has been very small."

That reluctance to come forward could leave the door open to further violence.

"People who commit these crimes rely on intimidation and anonymity," Jones said.

He warned that without an effective investigation to deter further crimes, "there's a good likelihood it could happen again." He added, "Once the door's been opened..." before his voice trailed off.

As one of the first openly gay members of the SFPD and the first gay man assigned to homicide investigations, Jones is particularly invested in the safety of the LGBT community. He recalled having attended community events for many years, and expressed concern that an increase in violent crime could force organizers to scale back events in the future.

"This should be scaring the bejesus out of everybody," said Jones. "We're not talking fistfights - we're talking guns."

Role of community in violence prevention

Ray Tilton defines community involvement in the face of violent crime. Around 1:30 a.m. on Saturday, June 26, Tilton and his friends were assaulted by a group of men from east of the city. Following his assailants' arrest, he organized a rally the following week to galvanize support for stronger anti-crime measures.

"I want to step forward and put a face to it," Tilton, 47, told the Bay Area Reporter.

The rally, entitled "Red Saturday," was held at Market and Castro streets, just feet from where he and his friends had been beaten. The rally was attended by representatives from Castro Community on Patrol, victims' advocacy group Healing Circle, the LGBT Community Center, the district attorney's office, and by local leaders including Supervisor Bevan Dufty, state Senator Mark Leno (D-San Francisco), and former Police Commission President and District 6 supervisor candidate Theresa Sparks.

"You define what happens to you when you're a victim of crime," said Paul Henderson, chief of administration in the DA's office. "This is how we empower ourselves and take back the neighborhood."

Speakers called for greater community involvement in anti-crime measures, and for partnerships between anti-crime organizations throughout the city. In recent months, CCOP has heavily promoted safety education, distributing a free pamphlet entitled "Clubber's Guide to Safety" and recruiting volunteers. The group's next volunteer training class is Friday, July 9, at 7 p.m.; anyone interested in attending is asked to RSVP to mailto:Training@CastroPatrol.org.

Michael Medema, a board member at the LGBT center, emphasized collaboration between neighborhood organizations.

"It's time for all of us to reach out to one another, beyond the borders of the Castro, and say as San Franciscans we're not going to take this anymore," he said. "The center will take the lead on bringing community forums, not only with LGBT community, but with members of other communities. ... This isn't SF versus the bridge and tunnel crowd. It's about our community joining other communities and saying no. No more violence. No more hate."

Dufty, who's running for mayor next year, agreed that efforts to quell violence needed to extend beyond the borders of the Castro.

"It appears to me now that there's some clear lines that represent where these homicides are coming from this year," he said, referring to shootings similar to the one on Pink Saturday. "There's clearly a division between two major gangs, and other major gangs that have been unaligned are lining up with one side or another."

Gang involvement in the Pink Saturday shooting is still under investigation.

"I'd be uncomfortable calling it gang-related," said Jones, but he confirmed that a "fairly large group of young people" from the Bayview had come to Pink Saturday, that the shooter and victim were familiar to each other, and that the shooting was preceded by an argument.

In addition, the homicide on Pink Saturday was followed by a second shooting two days later at a vigil for the murdered man, Stephen Powell, just blocks from an area covered by a gang injunction. The SFPD's Gang Task Force is investigating the second shooting.

When asked why the task force was not involved in Pink Saturday security planning prior to the shooting, SFPD spokesman Troy Dangerfield explained, "it's not something that they would normally do," since LGBT events in the past have tended not to attract gang activity.

Dufty explained, "We've had the Gang Task Force at Halloween, but traditionally Pink Saturday has been a community-driven event. It hasn't had the feeling of having gang participation."

That may change after this year. Looking ahead, Dufty told the B.A.R., "I would have no problem with the Gang Task Force coming."

"There are people who feel comfortable bringing guns into the Castro," said Jones. "You're really not safe in this neighborhood. ... The gay community has generally had a reputation for having safe events, but there's always a starting-off point when events become not safe. And this is our starting-off point."

Officer Len Broberg, a gay officer working with the Gang Task Force, echoed the speakers at the Red Saturday rally, pointing out that the community has an important role to play in ensuring safe events.

"The most important part of the equation is to have the community act as the eyes and ears of the police, and agree to be witnesses. We all have a job to do in this," he said.

There's widespread disagreement about whether this year's violence is part of a larger trend.

"The police mention that they feel it escalating, but I don't feel that," said Sister Titania with the Sisters of Perpetual Indulgence, the nonprofit organization that produces Pink Saturday. "What happened here was an isolated incident that could have happened anywhere."

As event organizers, the Sisters witnessed numerous uplifting moments during Pride weekend. At a ceremony Friday night to reflect on the events of the past week, Sister Maryly Onward recalled giving a parasol to a delighted 6-year-old girl who was watching the festivities. Sister Merry Peter helped a pregnant woman through the partying crowd and then drove her home. And Sister maeJoy B. withU described onlookers who came to the aid of a man who'd stepped in broken glass.

But Jones detected a troubling atmosphere at this year's Pink Saturday.

"I've been attending these since their inception," he said. "I was struck that it did not have a particularly gay vibe, or even a gay-friendly vibe."

The Sisters' positive experiences are a far cry from a video of a fight captured during Pride on Sunday. Posted to YouTube by an individual calling himself Spi0n (http://www.Spi0n.com), it shows a group of young women aggressively confronting and throwing punches at SFPD and California Highway Patrol officers. Seven women, ranging from 18 to 23 years old and hailing primarily from the East Bay, were arrested.

Although the SFPD is investigating the incident, Spi0n, who is straight and wanted to be identified only by his blog name, told the B.A.R. that the police have not contacted him. He also claimed that the fight with police was touched off when one of the girls punched a Pride volunteer in the face. Spi0n, who is French, was visiting the city with two friends.

Although incidents such as these have attracted widespread attention, CCOP Chair Greg Carey worries that there are far more that have gone unreported. He explained that failure to report a crime to the police can put the community at risk for future incidents.

"We live in violent times, in a violent world, in a violent city," Leno said at the Red Saturday rally. He urged those present to become involved with community patrol organizations. Speaking just a day before July 4, he declared, "We proclaim our independence from violence. And we embrace love and eschew hate."

"The good that might come out of this is getting the queer community engaged in crime issues," said District 8 supervisor candidate Bill Hemenger. Hemenger has suggested that selling tickets to Pink Saturday could prevent interlopers from attending. [For more on where the District 8 candidates stand, see the Political Notebook column on page 7.]

Whether the community gets engaged remains to be seen, but the approximately 50 attendees of the Red Saturday rally clearly felt strongly about crime, boisterously applauding the speakers and wearing red in solidarity.

"You must get up," organizer Tilton told the crowd to widespread cheering. "You must step forward, determined to make a change. ... Violent assaults, crimes of hate, and even being treated as second-class citizens cannot silence us."

The SFPD is reaching out to Pink Saturday celebrants by posting fliers around the city, asking anyone with video or photos from the event to contact Jones at (415) 553-9685 or to use the SFPD's anonymous tip line at (415) 575-4444. Even if you didn't witness the shooting, Jones said, your images may still be helpful to the police investigation.