The Courage to Leave: Abuse

Posted on www.AssociatedPress.com
By The Associated Press

Domestic violence isn't something that happens only to straight people During his physical exam, Troy, a clinical psychologist and a patient of mine for nearly nine years, confided that his partner had been abusing him for two years. My first thought was to blurt out, "Rihanna, what were you thinking?" A psychologist should know better! Instead I shut my big mouth and listened. As obvious as the right course of action -- to get out quickly -- seems, I can't presume to know how any of us would react in a similar situation. Domestic violence occurs in one in four same-sex relationships, but fewer than one third of cases are ever reported. Victims fear insensitivity from the police, and men especially feel emasculated by needing to seek help regarding physical or emotional abuse. In Troy's case the abuse started after he lost his job: "My boyfriend always made more money than me, and after I was laid off, he joked about it front of our friends." As is often the case in relationships, that emotional abuse led to physical abuse.

Posted on www.Sdvocate.com
By Advocate.com Editors 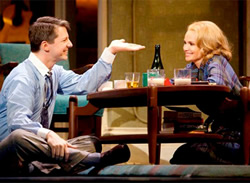 Kristin Chenoweth has posted a defense of Promises, Promises costar Sean Hayes on Newsweek's website after the actor was attacked in an article that many readers have deemed "homophobic," even though it was written by a gay journalist. In an article titled "Straight Jacket" that was posted on Newsweek.com on April 26, Ramin Setoodeh has drawn the ire of many readers for implying that it's impossible to believe openly gay actors as straight characters. Setoodeh specifically takes aim at Hayes for his otherwise much-lauded performance in the hit Broadway revival of the musical, for which he has been nominated for a Tony award as Best Actor.

Posted on www.NoeValleyVoice.com
May 10, 2010
By Heather World

At an April 8 community meeting at St. Philip's Church, local residents and merchants got a chance to see preliminary sketches of two proposed designs for a pedestrian park on Noe Street. Plan A (above), the car-free "plaza," would close a 60-foot section of Noe Street extending south from 24th Street. Plan B (below), the smaller "parklet," would allow drivers road access. The city is currently doing traffic studies at the intersection and on several side streets, in preparation for a second meeting.
Sketches by Seth Boor of Boor Bridges Architecture

Posted on www.Advocate.com May 10, 2010
From The Advocate December-January 2010
Tom Ford Tells All
By Kevin Sessums 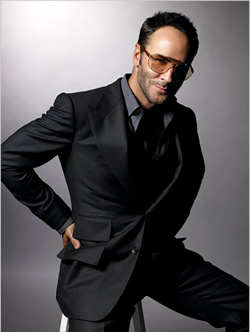 Ford has now remade himself, as director of A Single Man. Kevin Sessums's frank interview with Ford reveals the extent to which he's shedding his old skin.

"I don't think of myself as gay. That doesn't mean that I'm not gay. I just don't define myself by my sexuality," says Tom Ford with no sense of irony in his voice. Ford built a fashion empire at Gucci. When Yves Saint Laurent was acquired by Gucci in 1999, he reinvented that brand. Since then he has launched his own Tom Ford line of menswear and accessories. Always, throughout his career, whole collections and marketing campaigns were designed around his highly honed sense of the needs of others to define themselves as sexual beings.

"The gay aspect of A Single Man certainly wasn't what drew me to make a film of the Christopher Isherwood book. It was its human aspect, that unifying quality," he continues, segueing into a discussion of his remarkable directorial debut. The film, which was nominated for the Golden Lion top prize at the Venice film festival, and for which Ford won Venice's Queer Lion prize and Colin Firth the best actor award, opens in limited release December 11.

More Changes in the Castro

Posted on www.DTNA.org
May 4, 2010
By Dennis Richards
DTNA President 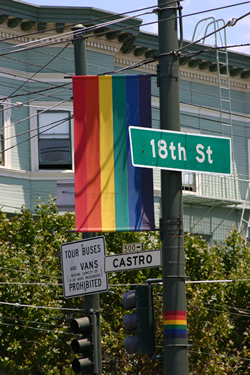 On March 23rd, the Plans and Programs Committee of the San Francisco Transportation Authority (sfcta.org) unanimously approved two projects that will enhance public transit in Duboce Triangle and improve the pedestrian safety and the urban design along both Duboce and Church.

First, the Plans and Programs Committee supported the plans for the Rail Replacement Program that will be administered by the MTA. The boundaries for the rail replacement program are along Church (between Duboce and Market) and along Duboce (between Noe and Church).

The transit corridor leading onto Church and into the Duboce Muni Metro Tunnel is a vital thoroughfare for the J and N connecting downtown and Upper Market, as well as all the neighborhoods served by the J and N. The existing track is nearly 40 years old and is nearing the end of its serviceable life. The rail replacement program replaces more than 4600' of track with a new support system and will also replace aging parts of the overhead contact system, upgrade the signal and track switch control system, expand and extend boarding islands (Duboce at Noe and Duboce at Church).

In addition to the Rail Replacement Program, the Plans and Programs Committee also approved funding for the "Duboce Avenue Pedestrian Improvements." As a result of this vote, two curb bulbs will be added to Duboce, one located at the northwest corner of Steiner and the other on the southwest corner of Sanchez.

Posted on Advocate.com
By Julie Bolcer 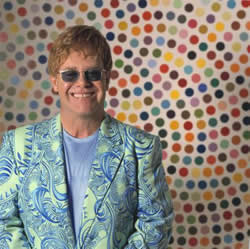 Egyptian music officials have banned Elton John from playing later this month because of his recent comments that Jesus was gay.

Sir Elton John has been banned from playing a private concert in Egypt later this month because music officials object to his recent comments in support of a gay Jesus and against Middle Eastern countries' treatment of gay people.

"The news agency quoted Mounir al-Wasimi, the head of Egypt's Musician Union, as saying that his country could not allow 'a homosexual who wants to ban religions, claimed that the prophet Issa (Jesus) was gay and calls for Middle Eastern countries to allow gays to have sexual freedom' to perform there." 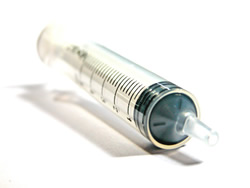 HIV prevention and treatment service coverage for injection-drug users (IDU) is too low in many countries to prevent transmission, a discrepancy that affects infection rates at the local level, new research shows.

"Governments that have not made needle and syringe programs and opioid substitution available need to be convinced that these interventions are the most effective ways to stop HIV spreading among [IDUs], and to the wider community," said lead author Dr. Bradley Mathers of the University of New South Wales National Drug and Alcohol Research Center.

Australian health authorities distribute 213 clean needles per IDU each year, compared with 188 for the United Kingdom, 46 in Canada and 22 in the United States. In Russia, which has the second-largest IDU population after China, there is no methadone substitution. Other prevention measures among Russian IDUs are, similarly, virtually non-existent. 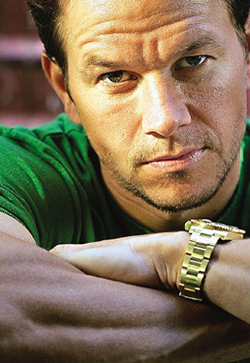 Mark Wahlberg said in a 2007 interview that he was “creeped out” by the script for Brokeback Mountain and "thankful" when director Ang Lee didn’t call him back to talk more about the film.

Now, The National Enquirer reports that it was Wahlberg’s Catholic priest who convinced him not to do the film.

Reads the article: "The 38-year-old reformed bad boy relies on his closest confidante and longtime religious mentor, the Rev. James Flavin, to help him pick and choose his parts. 'Mark is a practicing Catholic, and he never makes a final decision on a starring role until Father Flavin gives his OK,' an insider revealed to The Enquirer. 'Mark says he owes his career to Father Flavin.'... 'Father Flavin pushes Mark to honor his religious roots,' said the source. 'Even though Mark was offered one of the leads in Brokeback Mountain, he passed because of the gay subject matter, which clashes with Catholic doctrine.'"

In 2007, Wahlberg told WENN: "I met with Ang Lee on that movie; I read 15 pages of the script and got a little creeped out. It was very graphic, descriptive - the spitting on the hand, getting ready to do the thing. I told Ang Lee, 'I like you; you're a talented guy, if you want to talk about it more...' Thankfully, he didn't...I didn't rush to see Brokeback; it's just not my deal... Obviously, it was done in taste - look how it was received."

In 1994, when Wahlberg was still performing as Marky Mark and dodging rumors he was homophobic, the then budding actor talked to The Advocate about his gay uncle, his relationship with Madonna, and his love of And the Band Played On.

"After 30 years at the helm of her thriving family business, Miuccia Prada remains the most powerful woman in fashion." 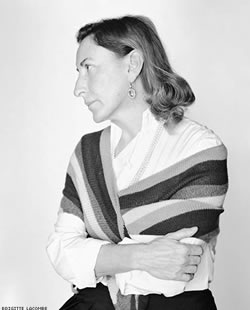 Miuccia Prada ticks my boxes. Cerebral, sensual, paradoxical, iconoclastic, hedonistic, and a dozen more -als and -stics could scarcely begin to explain my fascination with this woman and her work. In the 30 years since she took over the family business, she has steadily built an organization that offers a way to think, a way to be, as much as a way to dress. You can read her collections like you'd read a book. Sometimes there's enlightenment, sometimes bewilderment. But there's never boredom. "I want to introduce intelligence in my work, that's for sure," she says. "If you introduce even a little intelligence or a little criticism or a way of seeing things, that is important. I do that because I put all my ideas in my work."

Those ideas often run counter to perceived wisdom. For instance, when we met in Paris recently, she was insisting, "I'm against design like crazy, for a few years, actually. I hate the idea of useless design, just to make things more beautiful without any sense." It was a point she returned to several times in the course of our conversation. When she described technology as "an instrument like any other," rather than an end in itself, she added, "I always search for a reason for something. What's the sense of it? OK, it's beautiful, but who cares?

Market and Castro Plaza Finally gets the Facelift She Deserves? 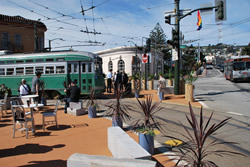 The intersection of Market and Castro is finally getting a much needed facelift. I mean really, it's about time. After all, the plaza has been closed to thru-traffic for almost a year now and finally the space now has new concrete bench/planter boxes. A few trees have been planted and we hope there are more to come most notably is stout fan palm. It's totally cute. I mean there is something about a palm tree in the middle of a cement jungle that just says, "I'm in a cool neighborhood."

The construction thus far is off to a great start and we are excited to see this space become a great place to relax, enjoy the sun, sip coffee, and people watch. It should also prove to be an excellent place to pick up on cute boys, but you didn't hear that from me. I'm taken.