Posted on www.tablehopper.com
By staff writer

I was happy to receive a note from the owners of ~CANELA~ that they have opened their doors. You can read all about this Spanish-style restaurant in my previous report, and Grub Street even has a slideshow of the renovation—they did a nice job. 2272 Market St. at 16th St., 415-552-3000.

Meanwhile, Inside Scoop reports stalwart ~2223 RESTAURANT~ has been sold to new owners, and is morphing into Jake’s on Market. New owners Tim Travelstead and Brad Becker expect the transition to happen after the holidays, and will be keeping the neighborhood-friendly vibe. Some slight tweaks: they will be offering “a broader selection of American contemporary cuisine (burgers, nightly specials, etc.) at a more accessible price point.

Gaga Wins for "Best Female" While Dressed as Man

Posted on www.advocate.com
By Luca Grindley 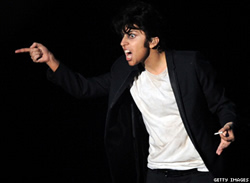 Her tweak on gender identity opened the MTV Video Music Awards on Sunday with a monologue in character as her male alter ego, Jo Calderone, who declared nothing real, and everything theater. Then Calderone tore off a black blazer and danced with a crew of men in white t-shirts and black pants during a rendition of "Yoü and I."

On a night when Lady Gaga's album and anthem of the same name for gay rights, "Born This Way," brought in the awards, Lady Gaga spent the entire evening as a drag king.

Police suspect the robberies were related. No injuries were reported in either case.

According to police, the first incident occurred at about 3:25 a.m., Sunday, August 14.

Officer Albie Esparza, a police spokesman, said two men were walking near the 700 block of Castro Street when they heard two people running up behind them.

Pica Pica Opening a Third Location in the Castro

Adriana López Vermut, owner of ~PICA PICA MAIZE KITCHEN~ will be opening a third location (the second in San Francisco) in the Castro in early September, as initially reported in the Scoop. The restaurant will be 1,500 square feet on two levels, with seating for 40. Local firm Arcsine Architecture of Oakland (which designed the Mission Pica Pica location) is designing the space; look for similar elements and materials.

The downstairs will feature an open kitchen and counters for pub-style dining; upstairs there will be seating and tables for two-tops and four-tops. The location will be right across from the SF MUNI F-line tram turnaround. Hours will be 10am-10pm daily. Look for an opening around September 10th. 3970 17th St. at Market.

Who Has Control of the Castro Rainbow Flag?

Posted on www.castrocourier.com
By Daniela Przybyszewska

A rainbow flag symbolizes diversity, hope and inclusiveness and that is important the Castro District San Francisco. But when it comes to the iconic flag flown over the Castro, it is the notion of exclusiveness that has sparked a controversy in the Castro neighborhood.

The rainbow flag over Harvey Milk Plaza flies proudly in the air and has been lowered only a few times in respect for the death of special individuals within the local LGBT community, such as for Officers Jane Warner and Jon Cook. But the issue surrounds when and for whom the flag is lowered, and who exactly is entitled to make this decision.

On Sunday, the site of that one-time base, the Castro Camera store, will open as a suicide crisis call center for The Trevor Project, a nonprofit that provides crisis intervention to LGBTQ youth.

The unveiling of the Trevor Lifeline's Harvey Milk Call Center at 575 Castro St. will fall on what would have been Milk's 81st birthday.

Posted on www.7x7.com
By Rossiter Drake

Frameline, the world's largest resource for lesbian, gay, bisexual and transgender media and film, will celebrate the 35th anniversary of San Francisco's International LGBT Film Festival beginning June 16 at the Castro Theatre. An 11-day showcase for more than 200 cutting-edge films from countries including Iran, Algeria, South Africa and Thailand, Frameline35 will also hold screenings at the Roxie Theater, the Victoria Theatre and Rialto Cinemas Elmwood in Berkeley.

As part of its anniversary program, Frameline35 will feature educational panels designed to revisit the festival's rich history and its unique role in shaping San Francisco's LGBT and arts communities.

Posted on www.advocate.com
By Teddy Partridge

Imagine Harvey Milk at 81. Today would be Harvey's eighty-first birthday, and it is the second annual Harvey Milk Day in California and elsewhere, where like-minded people gather.

Tom Ammiano, now a California Assemblyman and long ago Harvey's comrade-in-arms against the Briggs Initiative to ban gay schoolteachers throughout California, reflected one year ago in front of Harvey's camera shop how his old pal might have reacted to today's political players, specifically Sarah Palin: "Hate your politics, love your shoes."

Castro: Bagdad Café will be reborn next week as Criollo Kitchen (2295 Market Street), from Chef Randy Lewis, and the best news: it will be open 24 hours on the weekends! Lewis tells Tablehopper that the menu will "trace the soul food journey, from Africa to Cuba, Puerto Rico, New Orleans..."

Mission: A new Mediterranean place is in the works at 909 Valencia Street, almost next door to the long-shuttered La Rondalla. We have nothing further.

And, Coda (1710 Mission at Duboce) has been reborn as Brick & Mortar Music Hall.

Le Club Probably Not Reopening After All in Castro

Bleak news for those in our Castro San Francisco District who were looking forward to Le Club reopening. Remember that stuff about how Le Club (1250 Jones) was filing for bankruptcy in order to restructure and bring on onetime Food & Wine Best New Chef Randy Lewis as chef-partner? Well, now Lewis is off working on his own project, Criollo Kitchen, which is opening this week in the former Bagdad Café spot, and Grub Street received an anonymous tip the other day that Le Club really had, in fact, gone under back in February, has since been evicted, and will not be reopening. Was all that talking to the Chron just an effort to save face? Grub Street reached out to owner Gina Milano for comment but we've not heard back.