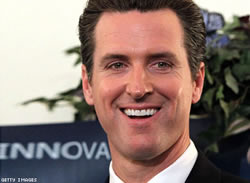 San Francisco mayor and California lieutenant governor candidate Gavin Newsom hopes to be less associated with marriage equality than he's been in the past. This disheartens the Castro Districts GLBT community.

The Bay Citizen reports that the Newsom — who issued marriage licenses to same-sex couples in 2004, leading to a lawsuit that reached the California Supreme Court and reverberated nationally — is distancing himself from the issue of marriage equality. After admitting to the newspaper that he's chosen to be less outspoken on the topic of gay marriage, especially in light of the August 4 federal court decision that ruled Proposition 8 unconstitutional, he said: "[Same-sex marriage] is at a completely different level now. What we needed to do in 2004 was to put a human face on it, and I think we achieved that goal. Now let's take the politics and the politicians out of it."

What does this mean to for the Castro Districts Community? By tempering the talk on same-sex marriage, Newsom may be hoping to capture voters in California's conservative San Joaquin Valley as well as Orange County and other right-leaning parts of the state. He's running for lieutenant governor against Republican Abel Maldonado, who currently holds the position. Maldonado has not yet made marriage equality an issue in the campaign, nor has he taken advantage of the infamous video clip of Newsom, after the state supreme court threw out a ban on same-sex marriage in 2008, saying gay marriage was coming "whether you like it or not." That clip was used effectively in the campaign for Proposition 8, which narrowly won passage. Newsom does admit that speech was not his shining moment.

Some pundits think Newsom could use the marriage equality issue to his advantage in the election, however the Castro community isn’t sure.

"From Day 1 in 2004, he stepped out on the issue," Chris Lehane, a San Francisco political consultant told the newspaper. "He now has an indelible courage brand, which every politician is striving to get."