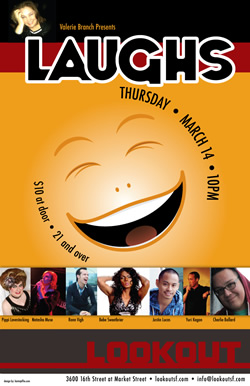 Stand-up comic, Valerie Branch hosts a night of amazing comedic talent featuring six of the Bay Areas top LGBT comics at the iconic Lookout bar and nightclub. Also appearing in this line up is San Francisco’s Omnipresent Drag Chanteuse, Bebe Sweetbriar, who will be singing a wildly hilarious number live!

Host / Producer, Valerie Branch
Valerie Branch started stand up comedy in Portland, Oregon, then moved to San Francisco where her cheeky wit and her bawdy drag character, Pia Messing, have earned her a strong following in the LGBT community. She has opened for Tommy Davidson at Tommy T's Showroom, featured for Justin Martindale at SF Comedy Cellar and performed regularly at the legendary Purple Onion. Valerie co-produces the Jokers and Queens Comedy and Drag Showcase, and was one of the rotating emcees at what SF Weekly 2012 vote voted “Best Open Mic”. Valerie runs The LOL Open Mic at Club OMG and produces comedy shows throughout the Bay Area. A regular radio guest, Valerie Branch can be heard on: FCC FREE Radio’s The Edge of Insanity, Get Your Fill, and, Radio Ha-Ha, Verve; on Mutiny Radio’s Pamtastik's Komedy Klubhouse and Under the Golden Gate; on Blog Talk Radio’s Small Business Forum Radio with Tony Wilkins.

Charlie Ballard
Charlie Ballard started his stand up comedy career at the legendary Brainwash Cafe in San Francisco, California, and since then has become a favorite at comedy clubs, colleges, and casino's all over the country. He's been published in Campus Magazine, Indian Country, The Advocate Magazine and has been seen on LOGO, Comedy Central, and NBC's America's Got Talent.

Ronn Vigh
Ronn Vigh’s brash attitude and acerbic wit have earned him a comparison to a young Joan Rivers by SF Weekly. Well, if she were male, gay, and didn’t shoot Botox by the pound. He was featured on NBC’s Last Comic Standing II and produces the successful “Harvey’s Funny Tuesdays” weekly comedy show in the Castro. No stranger to the comedy club and alternative scene, he has hosted and performed at venues such as the San Francisco Punch Line, Palm Springs Pride, 10th Annual Michigan Comedy Fest, Rooftop Comedy’s Out Loud Festival, Las Vegas Q Festival, Lake Tahoe Gay & Lesbian Winter Fest, and the list goes on and on and on - much like when Ronn speaks.

Natasha Muse
Natasha Muse is a comedian, a skeptic, a mom, and at least the second-funniest transsexual you know. Her cerebral writing, whimsical wordplay, and unique perspective on life have earned her the adoration of audiences and the respect of her peers. Natasha performs regularly all over the Bay Area, including Cobb’s Comedy, the SF Punchline, and the Actors’ Theatre, where she produces and hosts “A Funny Night for Comedy” on the second Sunday of every month. Natasha is the winner of the 2010 Battle of the Bay competition, Miss Toolbox 2011, and also took home the Miss Photogenic trophy in Model Search 2004.

Yuri Kagan
Yuri Kagan, originally from San Diego, has quickly become a Bay Area favorite. He has been featured in SFWeeekly, the BAR and his mother's weekly gazette. He also is a regular at the San Francisco Punchline. He has received much acclaim for his blog in which he talks about his act, years of bartending in gay bars and how life has screwed him over. Check out his website at www.YuriKagan.com.

Justin Lucas
San Francisco native Justin Lucas commenced his pursuit of stand-up comedy in March of 2011, and after several months of performing on open-mic nights, he began appearing at various popular Bay Area venues such as the San Francisco Punchline, Cobb's Comedy Club, and the San Jose Improv. Soon, club managers were asking Justin to open for well-known comics, like Bobby Lee, Rex Navarrete and Alec Mapa. Additionally, Justin has successfully entered a number of competitions, becoming a finalist in local contests like the 2011 Rooster T. Feather's Comedy Competition and the Battle of the Bay Comedy Competition. He was a semi-finalist for the 2012 Tommy Ts Comedy Competition and was fourth runner-up in the 2012 Bay Area Black Comedy Competition. His most recent achievement, however, was advancing to the semi-finals for the 37th annual San Francisco International Comedy Competition. Justin continues to pursue his performance career, while simultaneously working toward a vocation in voice-over, a talent showcased in his live shows.

Pippi Lovestocking
Pippi Lovestocking is the drag personae of actor Scot Free of San Francisco.
Originally from a small town in North Carolina just outside of Raleigh, Scot was never the type of kid to hide his light under a bushel. An aspect of his personality that was not embraced by the conservative southern baptist citizenry of his hometown. "I was raised within the church but still turned out gay, must've been all the snake handling" quips Scot when asked about his sexuality.

Scot pursues an acting career and has numerous film credits as well as many appearances on Japanese TV. He performs stand up whenever his schedule allows. When asked why he performs as Pippi, He replies "I'm just a garden variety faggot, I only dress in drag so I can feel a little more alienated from the gay community, all this acceptance is hard to take. Besides if I should get lucky and end up famous I'd rather do so in drag than as a regular guy, that way when I don't feel like being 'on' I can just take off my costume and makeup and blend in with the rest of the crowd."

BeBe Sweetbriar
Dubbed the Omni Present Drag Chanteuse, BEBE SWEETBRIAR immediately became a force to reckon with upon arriving on the entertainment scene 5 years ago. Winning two of the three prominent drag pageants by becoming Miss Gay San Francisco 2008 and Miss Desperate DIVA 2008, she has worked tirelessly as a fundraiser for the likes of the AIDS Housing Alliance, Under One Roof, Larkin Street Youth, Lyric, GLAAD, Richmond/Ermet AIDS Foundation and many, many more.

One of the few drag personalities to sing live while performing, BeBe has literally graced every notable stage in San Francisco, bridging many gay sub-community gaps. She has also been the opening act for Destiny’s Child Kelly Rowland, “Ugly Betty’s” Alec Mapa and Dance Diva Kristine W. Adding recording artist to her list of performance accomplishments, Mid July 2012 marked the release of BeBe's fourth single and accompanying music video “Here We Go”.