Join Hands and Hearts at the San Francisco Trans March 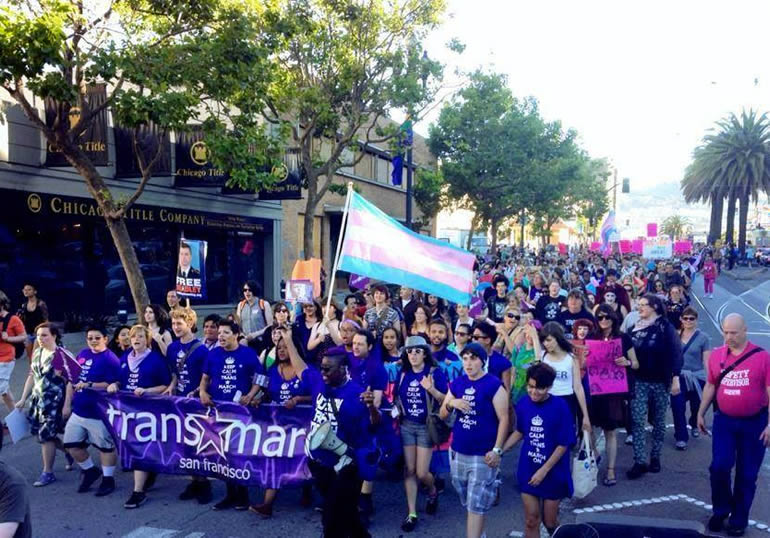 The mission of the San Francisco Trans March is to inspire all trans and gender nonconforming people to realize that they are safe, loved, and empowered. The Trans March is a safe space for our diverse communities to unite and achieve the social justice and equality that each of us deserves.

The first Trans March was on June 25, 2004 after an anonymous email was sent around to several community activists. The email read as follows:

We are calling for this march to demonstrate that we are a significant and growing portion of the LGBTIQ community; to increase our visibility and presence in the TGIQLB community and the overall community at large; to encourage more trans and gender-variant people to come out; to build connections among ftm, mtf, bayot, crossdressers, sadhin, hijra, transvestites, bantut, drag queens, drag kings, mahu, transsexuals, bakla, travesti, genderqueers, kathoey, two spirit, intersex and those with other labels for themselves and no labels for themselves, those who see gender as having more than two options, and those who live between the existing options; to support one another as a community, through all of our struggles; to speak out against violence, hate, transphobia, and the oppression of any and all of us under the existing social structure; and to be fabulous and powerful in the company of others that are fabulous and powerful.

This email was the catalyst that pushed several activists to organize the first Trans March on 2004, which began (and still begins) and Dolores Park and ends at Civic Center. The first Trans March had a few hundred people in attendance. The following year it doubled. Now in the thousands, this event keeps growing every year! (Not only does it get bigger, but it get’s better, too!)

Here is the series of events (and times):

March (the Trans March is a sober event): 6 pm at Dolores Park

The Trans March is organized and run entirely by volunteers from the community. A small board of directors oversees everyone's efforts, but the event itself is the result of the hard work of many, many people doing things big and small. Want to volunteer? Click here! http://www.transmarch.org/volunteer

Dress up, show up, bring signs, speak out, and come be a part of history!