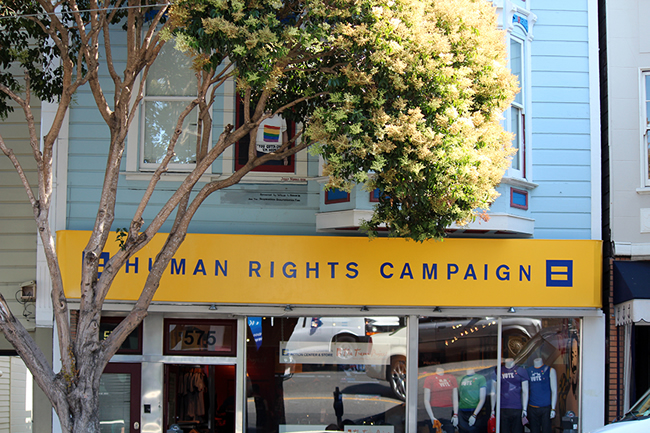 The San Francisco Human Rights Campaign Action Center and Store is located at 575 Castro Street in San Francisco. In 1972, Harvey Milk, an American politician who became the first openly gay person to be elected to public office, opened Castro Camera at 575 Castro Street (in between 18th and 19th Streets) and lived above the store with his partner. In 2011, it became the Human Rights Campaign Action Center and Store, but it still has Harvey Milk written all over it.

The store was recreated as a set for the movie Milk, a biopic of Milk’s life, and was carefully built to reflect the original detail including an old red couch and barber's chair. The set was so good, it drew the attention of many local residents who remembered the original. If you step outside the store and look up, you’ll see a painting of Harvey Milk and his motto, "You gotta give ‘em hope!" 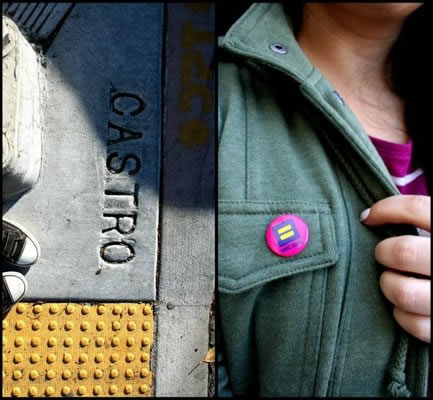 The HRC Store is Your One-Stop Shop for HRC and LQBTQQ Apparel, Gifts and Castro Information!

San Francisco has always been a key player in the gay, lesbian, bisexual and transgender movement. Whether you’re a local or you’re visiting for Pride or the Castro Street Fair, stop by the HRC San Francisco Store for a wide spectrum of merchandise featuring the signature Human Rights Campaign's equality logo. They have t-shirts, sweatshirts, jackets, hats, key chains, lapel pins, bracelets, necklaces and sterling silver jewelry. In addition to merchandise with HRC’s signature ‘equal’ logo, the Action Center and Store also offers items emblazoned with the words and images of Harvey Milk. If you purchase one of these Harvey Milk items, 100 percent of the proceeds are donated to local organizations that continue to carry on the legacy of Harvey Milk.

Not only is the HRC Store the perfect place to get a San Francisco souvenir, but they’ll be your tour guides as well! Have a question about what to see or where to go? Head to the HRC Store!

The Human Rights Campaign partners with The Trevor Project, the leading national organization focused on crisis and suicide prevention among LGBT youth; the Harvey Milk Civil Rights Academy and the GLBT Historical Society. Along with being the action center and store, the location includes a workspace for The Trevor Project’s crisis and suicide prevention call center, with HRC-funded computer networking and telephone equipment. This partnership enhances The Trevor Project’s reach and their ability to train local school workshop volunteers in the Bay Area. In addition, HRC will make a $10,000 annual donation for the next three years to The Trevor Project, whose mission to build community and inspire positive change for LGBTQQ youth.