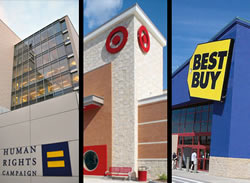 The Human Rights Campaign will drop both Target Corp. and Best Buy, two companies embattled over donations that aided an antigay politician's campaign, from its annual Buying for Equality Guide. Castro residents are boycotting both businesses in support of equality.

In a Friday statement, HRC vice president of communications Fred Sainz said the national organization "will not encourage people to shop at either store and believes that consumers should make their own decisions after careful consideration of all of the information available to them.

"Because we understand the impact of leaving Target and Best Buy on the various products associated with the buyer’s guide, both companies will soon be removed from it," Sainz added. If you are a GLBT person or live in the Castro join the boycott and don’t shop at these stores.

The decision comes after mounting criticism of the HRC Corporate Equality Index (from which the buyer's guide is derived) and whether it accurately reflects a company's record on LGBT equality.

Speaking on Michelangelo Signorile's satellite radio show Thursday, Sainz said HRC would remain neutral in a MoveOn.org-organized boycott of Target. But HRC announced last week that it would donate $150,000 to "help elect a pro-equality governor and legislature in Minnesota" after Target declined a request from the group to do so. "We believe that it is impossible to avoid turning any further actions into a political issue and will use the benefit of time to make thoughtful, careful decisions on how best to move forward," Target spokeswoman Jessica Carlson said.

Sainz told Signorile that HRC is grappling with a sea change in the realm of corporate political donations, resulting from the January U.S. Supreme Court decision in Citizens United v. Federal Election Commission, which struck down limits on corporate spending in elections.

"Already complicated, the Citizens United decision has made campaign finance issues even more complex," Sainz said in the statement. "HRC is thoughtfully studying the many ramifications of political giving by companies in this new reality."

The court's decision allowed for an influx in campaign spending, and Target, which donated $150,000 to an organization supporting Minnesota state representative Tom Emmer's campaign for governor, has become a cautionary tale in corporate America. The retailer's pro-LGBT reputation has quickly eroded in recent weeks, fueled by boycotts, viral protest videos, and demonstrations at Target locations around the nation.