Get Naked, Castro! Register for the Santa Skivvies Run to Raise Funds to Fight HIV 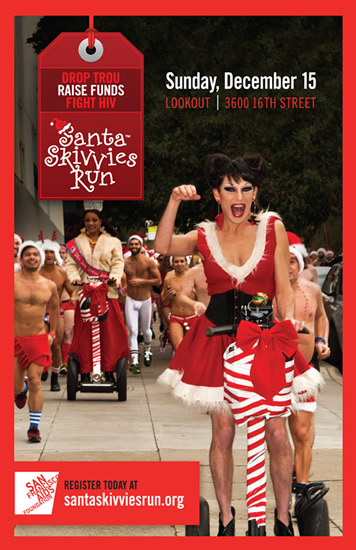 Want to get naked for a good cause? (Because we all like to get naked anyway.) San Francisco’s favorite holiday romp is back! On Sunday, December 15th, men and women in the Castro District and beyond will down to their underwear, and maybe even some holiday-themed costumes (if it’s still chilly out!), to raise funds for San Francisco AIDS Foundation in the fourth annual Santa Skivvies Run. The event supports the foundation’s free, local HIV prevention and care services that benefit thousands of clients annually, especially in hard-hit neighborhoods like the Castro, noted a recent press release.

"It’s hard to think of an event that brings more smiles to people’s faces than Santa Skivvies Run," said Neil Giuliano, foundation CEO, according to the press release. "Each year this event grows tremendously, both in fundraising and popularity, and it’s a testament to the dedication of our loyal supporters—they will run around in underwear and costumes to make sure our programs remain free and accessible for all of our clients. This truly is the can’t-miss event of the holiday season."

This year the foundation hopes to raise more than $50,000, which would break last years record. The run will begin at the famous Lookout Bar, which is the official host of the run. Participants will run through the Castro District, being lead by beautiful drag queens on Segway scooters. Runners can then enjoy the Santa Skivvies Village outside the Lookout!

The registration fee is $35, and runners receive a Santa hat as a registration gift. can register the day of the event, from 10:00 a.m. to 12:30 p.m. at Lookout. Onlookers are welcome and encouraged to make a contribution to San Francisco AIDS Foundation at the event.

There’s also talk of an official Santa Skivvies after party... so stay tuned!