Posted on www.ebar.com
By Seth Hemmelgarn 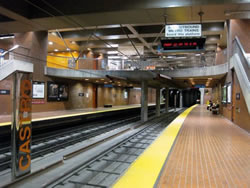 A gay San Francisco man said even after another passenger repeatedly shouted "faggot" at him and grabbed his arm, the driver of a city Muni bus let his alleged attacker continue riding. The Castro District and Gay community is outraged.

Larry Richardson, 58, said he was in the front of the number 33 bus when the incident started at 1:35 p.m. on Monday, August 30 as he rode toward his home in the Castro District.

Richardson said that one stop after he boarded, another man got on and without provocation started yelling "fucking faggot" at him. Richardson said his Muni pass was attached to a rainbow necklace he was wearing.

He said that at Corbett and Clayton streets, in the Upper Market Castro District San Francisco, the man stood up and grabbed his arm "pretty hard," but Richardson jerked his arm away. The bus driver stopped, stood up, and told the other passenger to get off the bus, but the man said, "I'm not getting off this fucking bus. You can't fucking make me get off," said Richardson.

"The bus driver let him stay on," he said. "He didn't call the police." The man also said that Richardson would die in the next two days and nobody would know who did it, he said.

During the incident, "Everyone on the bus got completely quiet," said Richardson, except for a woman who tried to quiet the man. He said there were people in the back of the bus but it was practically empty near him.

Richardson said the man continually berated him until he got off the bus at 18th and Hattie streets about 15 minutes after he'd boarded. He said the man stood in the bus doorway and the driver told him to get off, but the man said, "You can't make me get off this bus until I'm ready to." The man finally stepped off the bus after a few more seconds, said Richardson.

He said that as he got off the bus at Noe and 18th streets, he tried to talk to the bus driver, but "he wouldn't even look at me."

Richardson has submitted a complaint to the San Francisco Municipal Transportation Agency, which he provided a copy of to the B.A.R. He has also filed a police report.

In his report to the transportation agency, Richardson said that the driver refused to give him his name.

Richardson, who's disabled, said that Muni is often his only means of transportation, but he's been afraid to ride since the incident.

He also said that he called police as soon as he returned home, but was told since it wasn't an immediate threat, "we'll get an officer out there when we can."

On Friday, September 3, Officer Albie Esparza, a police spokesman, said in an e-mail that a report had been filed and the hate crimes unit would investigate the incident.

"We will be reviewing the cameras aboard the Muni coach which is standard practice anytime a crime occurs aboard a Muni vehicle," he wrote.

Tuesday, September 7, Richardson, who first spoke to the B.A.R. last Thursday, said that after he talked to the B.A.R., and apparently after the paper had contacted police, police called him and said that paperwork on the incident had been lost. Two officers were sent to his home to take another statement from him Friday, he said.

Paul Rose, media relations manager for MTA, wrote in an e-mail to the B.A.R. on Friday, "All I can say at this point is that we are supporting a police investigation on the matter."

Richardson said the man who attacked him was around 50 years old and about 150 pounds. He estimated the man, who was black, was 6 feet 2. He said the man had been wearing round headphones "about the size of softballs," a white shirt, white tennis shoes, and blue jeans with a black stripe below the knee that had "MF" in white lettering.

Last month, 26-year-old gay San Francisco man, Zachary Davenport said he was beaten by a group of youths who repeatedly called him "faggot" on the J Church near Market and Church streets in the Castro District. A 15-year-old boy has pleaded not guilty to felony charges in that case.