Castro Home for Our History - On Scene With Bill Wilson

Posted on www.sentinel.com
By Bill Wilson 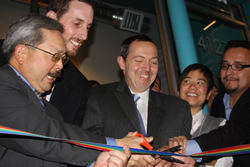 The Castro San Francisco history has a home at 4127 – 18th Street in the heart of the San Francisco Castro District. Just writing those words sends a sense of pride through my being as it does for Castro residents. The vision of those who created some of that history and those who have sought to preserve it has been realized as the GLBT History Museum formally opened in the heart of gay San Francisco, the Castro on January 13 with a ribbon cutting by Mayor Ed Lee, former Supervisor Bevan Dufty, current Supervisors Wiener and Campos.

As a person old enough to know of the time when the word Queer had no positive context, I thought this was a big enough deal that I literally got off the plane from Frankfurt, Germany having started the day in Rome, Italy and went to the opening. Mycastro.com is just as excited. I missed most of the speeches at the VIP reception that preceded the ribbon cutting, which is jut as well since the words thank you can only be said in some many ways before losing their impact to repetition. Yet there are many people who have worked long and hard to make the Castro San Francisco's Museum a reality who are deserving of great praise.

Armistead Maupin, who donated the dress worn by Laura Linney in the television adaptation of his books, Cleve Jones who lent Harvey Milk's bullhorn for exhibit and Phyllis Lyon, who donated the pantsuits worn by her and Del Martin at their weddings in 2004 and 2008, all attended the reception preceding the opening of the museum. The Castro wants you to be their too!

Perhaps the best gauge of the popularity of the idea of a gay Castro San Francisco history museum was that once the ribbon was cut and the museum opened to the public the line of people waiting to get in stretched up the block to The Edge Bar, which according to rumor I heard will close on Sunday. MyCastro.com hopes not. The line stayed that long for about an hour and didn't diminish until they started telling people they were going to close at 9 and they might want to come back at another day to have the time to see everything. The Castro District encourages San Francisco to come out.

The positive aspect of the long line was that it kept me outside talking with people. I had the opportunity to personally thank some of the people I've come to know over the years I've been attending GLBTHS events in San Francisco and the Castro District. I don't think the importance of telling our wonderful gay and San Francisco stories can be overstated. The only person that sees the world through your eyes is you. The only one who can tell your story is you. So come be a part of our Castro San Francisco District. MyCastro.com will be there.You don't even have to be able to write it down because they have people who take oral histories.