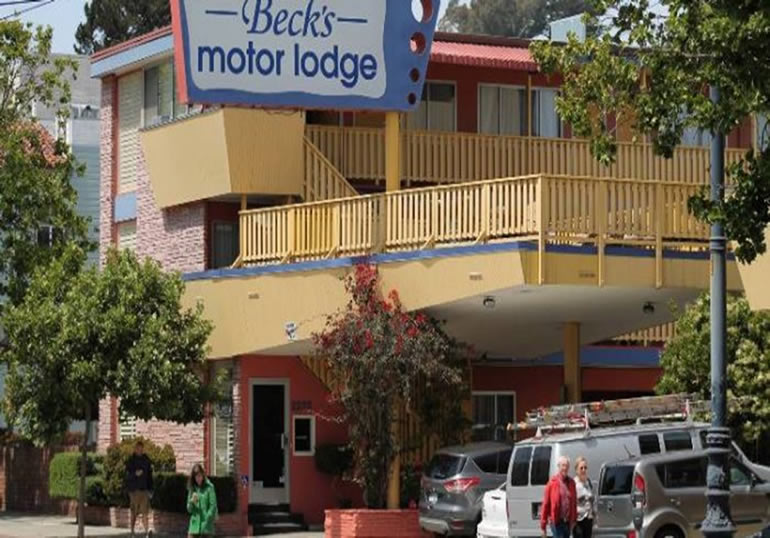 Believe us, the Castro Street sidewalk isn't the only thing in the neighborhood that has felt the effects of on-going construction.

Beck's Motor Lodge, one of the Castro's mainstays for out-of-towners has been undergoing renovations for what seems like forever. But according to the boutique-style motel's Facebook page, Beck's should be nearing the end of its long upgrade process.

Upgrades to the motel have included painting in the rooms and new furniture such as beds and other accoutrements. Beck's announced the first bunch of newly-renovated rooms back in September of last year, and are now preparing to end the long project that is bringing it into the 21st century. Beck's posted to the lurkbook on November 13 that the Market Street spot was entering its "fourth and final" phase of renovations. The process is being topped off with repairs and upgrades to its elevator, which have been running since the motel opened in 1958.

For those who don't dig math, that's a 61-year-old elevator. So making it more tenable and less "Tower of Terror" is long overdue.

Beck's is a Castro institution, a landmark that has managed to outlast a city-wide push to put the bigger, pricier outfits into buildings. But even with its charm, reviews of the motel have called it "outdated." This renovation process will hopefully do the trick.

Despite all the tweeks that Beck's has gone under in its long overhaul, it has stayed open to house visitors for all of the Castro's--and actually, all of San Francisco's--many events. A scroll through their FB chronicles their many refurbishments but also all the events they house travelers for. Beck's has been giving visitors a place to put their feet up and get a good night's sleep through two go-rounds of Castro Street Fair, Folsom Street Fair, and Pride weekend festivities. They are also big into the Bay Area sports scene and offer stay to those looking for a place to stay after a Giants game. We don't have the official numbers, of we can imagine that Beck's housed some boozy baseball faithful after the Castro's World Series celebrations last month.

An official date for the end of construction has not been announced.