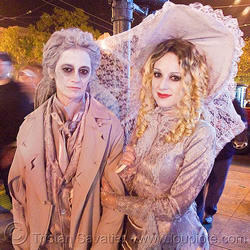 Four years after San Francisco officials shut down the annual street party that occurred Halloween night in the Castro District, the city’s gayborhood has slowly adjusted to the change. The focus of the neighborhood’s holiday celebration has returned to being more residential in nature and LGBT-centric.

Many more Castro district residents are hosting house parties, while visitors now come to go to the area’s many gay bars rather than mingle on the street.

"All of my friends are having parties or small gatherings; that just seems to be what is the trend now," said Mission Station LGBT liaison Sergeant Chuck Limbert, who is working on the police department’s plans for this year’s holiday. "People should be able to go to their friend’s house and celebrate Halloween in a way that is safe."

Predicated on curbing the violence and gay-bashings that had increasingly become as signature a feature at the Halloween street bash as costumed revelers, the cancellation of the outdoor bacchanalia in 2007 was, nonetheless, controversial. While many Castro residents cheered the decision, others lambasted city leaders for killing the cherished tradition.

Following the first year of the shutdown, when the majority of Castro district businesses and bars shut their doors at 10 p.m., the shock of seeing what some described as a police state soured many on what had been considered a high holy day for the gay community. Even those who agreed that the city needed to take control of the situation were pained to lose the party.

"I was depressed. No one was more sad to see Halloween go away than me," said Castro resident David Perry, a gay public relations professional who oversees the city’s Home for Halloween campaign. "I went every year and was always dressed up. It is one day before my birthday. But about seven years or eight years ago it stopped being fun for me. I don’t want to be yelled at and I don’t want to see people abusing people."

Ever since 2008, when the bars and restaurants were allowed to remain open for business, Halloween has remained relatively calm and peaceful in the Castro. Perry said people have accepted the situation and are beginning to create their own new traditions for celebrating the holiday.

"I would say it is true that there is a new normal about Halloween in the Castro," said Perry. "My neighbor upstairs now has a party every year. He started due to our campaign." 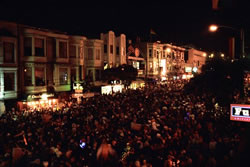 Castro residents Billy Clift and Carl Dickinson, partners who have lived in the Castro for seven years, used to invite friends over prior to hitting the street party each year. As the event became less safe, they would avoid the unruly crowds and head straight for the Edge bar on 18th Street.

Now, after handing out candy to trick-or-treaters, the couple hosts a Halloween party at their home.

"We used to not have a Halloween night party," said Clift, an independent filmmaker. "Two years ago we decided not to go anywhere at all, stay here and have a typical house party instead. Everyone was happy to do that because they didn’t want to go into the Castro as well."

Event producer Marc Huestis also stopped attending the Castro Halloween parties because of the negative vibe among the crowds.

"I always enjoyed Halloween until it got creepy and crazy. I didn’t even go the last few years because I was scared to death and not in a good way," recalled Huestis.

Longing to feel Halloween be fun again, Huestis this year is hosting a screening of the classic horror film Poltergeist at the Castro Theatre Saturday, October 30. On stage will be one of the movie’s stars, JoBeth Williams, who played the mom, as well as a Carol Ann look-a-like contest.

"I am hoping to be able to create the spirit that once existed the night of Halloween in the Castro District the night before Halloween," said Huestis. "We will see murder on the screen but not in real life."

With Halloween falling on a Sunday this year, Castro leaders expect a lighter than normal turnout on October 31. There may be bigger crowds descending on the neighborhood the night before, though many bars and clubs across the city will be hosting Halloween-themed parties that night, such as Gus Bean’s annual Colossus Halloween Monster Ball.

"Everybody is expecting it to be the same as last year. I hate to be a bore but that is how I feel and everybody else feels," said Steve Adams, president of the Castro’s merchant group. "Last year was pretty tame and it was on a Saturday night. A lot of people were out but it wasn’t wild and crazy."

This week the independent television station KRON 4 taped several public service announcements hammering home the message there is no Castro Halloween party. One features the city’s police chief, George Gasc-n, while another stars a resident of both the Castro and South of Market neighborhoods. They will begin airing Bay Area-wide next week.

The campaign website, www.homeforhalloween.com, will once again feature listings for Halloween events throughout San Francisco and in other cities. It should be updated over the next two weeks.

"I said all along this should be at least a five-year-long campaign until we change people’s ideas about what the new normal is. I do think people get the message there is no planned street party in the Castro," said Perry. "If you are going to come to the Castro and treat the LGBT neighborhood as a shooting gallery, we want you to stay home for Halloween."

Perry was alluding to the shootings that marred the 2006 Halloween event that ultimately led city officials to shut down the annual party. While no one died that year, a similar incident that occurred during this year’s Pink Saturday party in the Castro in late June led to the death of 19-year-old Stephen Powell.

Limbert said the police have no reason to believe that Halloween in the Castro will return to its more dangerous permutation, despite what occurred during Pride weekend. Similar to last year the streets will again be open to traffic and the police will have a larger presence in the neighborhood throughout the weekend.

"There are going to be no street closures. We will have a police presence there to facilitate traffic and help people going to the bars," said Limbert, adding that there is no plan as of now to have portable toilets set up in the area. "We are not even towing cars this year. We are not putting anything up that would slightly state we are going to have some venue there."

Compared to years past, Limbert said the neighborhood’s concerns around Halloween have significantly diminished.

"It has gone back to what is was supposed to be, a neighborhood gathering with people going out to the bars," he said.